China's BBC ban reminds us of the value of shortwave

China's announcement this week that the BBC World News TV channel will be blocked is another reminder that modern content distribution technologies, those that use the internet, have made censorship easier rather than harder.

When I worked in Hong Kong for CNN we knew that the satellite downlink for distribution of the TV signal in China went through a party controlled facility and that if the image of the Tiananmen Square "tank man" was used in any way, the signal would go dead for a time.

International newspapers would sometimes arrive a little late with stories blacked out.

Shortwave stations with content the party didn't approve of would be masked by high power jamming signals. It was sometimes possible to receive the original signal by moving the antenna or off-tuning to some extent.

In those days readers, listeners and viewers at least knew something was being hidden from them.

As the Internet spread around the world it was thought that it would bring unfettered access to all of the worlds knowledge and opinion. It turns out that rather than decentralising network access, the modern internet has done the reverse and centralised monitoring and controlling of all of our communications.

A software developer who had migrated from China told me of the amazing experience of working for a US company that had the US version of the internet available in the office. This person was astonished to read Wikipedia articles that presented a far different view of modern Chinese history than had been available to them.

In recent years, many countries, including Australia have shut down shortwave broadcasting as the audience is small and hard to measure. Radio Australia used to have good coverage of our region including China. 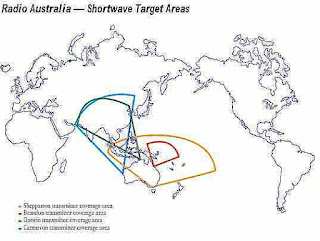 I recently visited the decommissioned Radio Australia transmission site in Shepparton. It was an impressive facility.

Low earth orbit (LEO) satellite internet has the potential to provide internet services all over the world but I expect it will be regulated by each country and the penalty for not complying will be that customer billing will be blocked or perhaps the uplink signals will be jammed in some way.

Digital communication over shortwave radio has improved massively in recent years. The combination of a low power shortwave transmitter and a personal computer can be detected around the globe. WSPR is just one example. 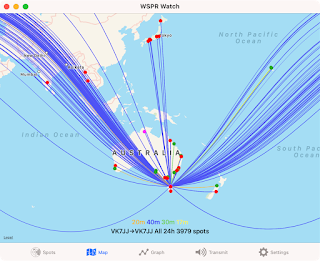 I propose a shortwave service that transmits respected world news and information programs using a variety of digital modulation systems. It should have periods of "old school" radio teletype, PSK, and more advanced modes such as MFSK that have been shown to get through despite weak signals and even deliberate jamming.

Software to decode the audio signals, such as fldigi is widely available for personal computers and phones and this would need to be explained and promoted around the world so that the audience could find out about it despite undoubted censorship.

The audience for this stream of uncensored text news would be very small but the content would be highly valued by those who found it. Stories could be shared through secure messaging within the country. Single use domains could be used as a way for readers to acknowledge reception.

Peter you are spot on regarding short wave. Unfortunately our government does not appear to show any understanding of the issue. I have tried as I know you have to bring these facts to their attention, but no luck.