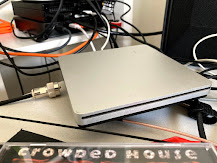 There was a time when I bought a lot of CDs. Years ago I ripped them to AAC files to save space but now disks are cheap and I've decided to repeat the process but using the lossless flac encoding.

For a while I used fre:ac on macOS to rip the CDs. It's free and does the job but is a bit annoying to use when ripping a series of disks - it doesn't reliably recognise disks when they're inserted, doesn't find cover art, and doesn't eject the disk when done.

Not much of a screenshot! It works and does all the things I want. Installation on Ubuntu 20.04 was easy using apt to install abcde and flac.

One speed bump is that the only CD drive I have is an old Apple external USB SuperDrive and when plugged in to anything except a mac with high power USB it refuses to power up. Happily smart people have been here before and figured out the little string of data it needs to be sent to wake it up.

I can play these files on the computer but I also use, and recommend a FiiO M3K player.

Listening back to music I'm very familiar with from my teens, such as Jean-michel Jarre's Equinoxe, track 4, it's clear to me that my hearing has deteriorated. I guess I could try to boost the high frequencies to compensate. It's nice to know that I have all the bits backed up without loss, but I'm not sure I could tell the difference any more. There is some evidence that the tricks that audio compression does taxes the brain as it tries to restore the missing signals so I figure I'm better off, if only unconsciously.