I had to wait a few days in Cobar for a new brake drum to come in and be fitted. There's not a lot to see and I saw it all. Picked up the van and the brakes are still not right so I decided to push on to Wilcannia. 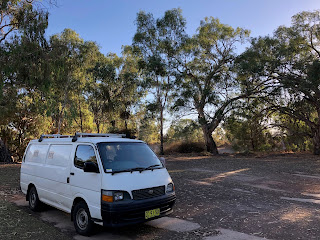 An end fed for 40m was set up but storm activity made it not worth while. The van's solar system and the fridge create a lot of HF noise so in Cobar I purchased an SLA battery so that the radio can be run completely isolated from the van and this seems to work.

The road is pretty good but coming out of Cobar it was mostly goats which was better than kangaroos which have a nasty habit of jumping in front of cars. Plenty of them lie dead on the road being eaten by crows. 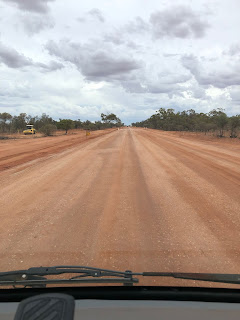 The van is very comfortable. At Wilcannia the night was hot at first - I ran the fan for a while - but there was a cool change and it was even cold by morning.

It's Saturday now and I've arrived in Broken Hill. A major attraction for me was to visit the Mad Max 2 museum at Silverton. 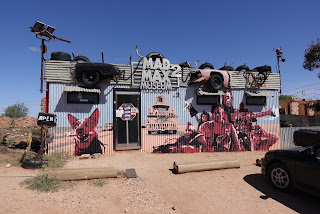 They've got lots of artefacts from the production including some of the vehicles. Clearly the production left a bit of trash in the desert that people have been finding and bringing in for the display.

Tonight I'm going star gazing again, it's one of the most amazing things about the outback.

The brakes in the van are very soft and I'm going to stick around in Broken Hill to get this issue fixed before heading further west.
Posted by Peter Marks at 3:29 PM

Soft brakes, you may be up for a new master (brake) cylinder. I remember when you first got the van I was surprised at the price you paid for a van which had done so many miles, that was until I looked at carsales.com etc and saw how much a newer van with lower miles was going to cost.

I enjoy reading of your exploits. What frequencies on 40m do you usually use?

All the best from, Peter VK1XP