Vanlife: first night out in the van 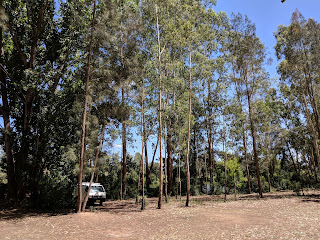 Cattai campground on the banks of the Hawkesbury river is very quiet on a Wednesday night. Only a few other campers and just one visible from my location. There is lots of friendly wildlife including about 8 wallabies, a big lizard, some sort of snake and various birds.

I backed the van up in a spot looking over the water with some bush and trees on either side. Unfortunately not quite level but perfectly fine.

A simple half-wave dipole made from thin, multi-strand, figure eight speaker wire was strung up between two trees by throwing a line with a stick on the end over a branch at each end. It hung quite low but tuned up well. This a a very low noise location I guess because the sites are unpowered. (Although there is power to the amenities block). Listening to short wave was very pleasant.

For lunch a large fried sausage with some salad followed by an afternoon of reading, tuning around 40m, and quiet contemplation by the river.

Late afternoon I called CQ on 7.1MHz and quickly heard back from Rob, VK2MZ who was very strong. We gave each other feedback on audio quality and equalisation - he was experimenting with a speech processor for an FT-817 which worked fine except when he used a power amp. With just 5W he was still very strong. On my new FT-891 Rob found that position 2 on the Yaesu microphone sounds clearer - I've read that position 1 is better tuned to Japanese voices. Later, Peter, VK2FPGK joined the discussion when he heard us talking about software defined radio. 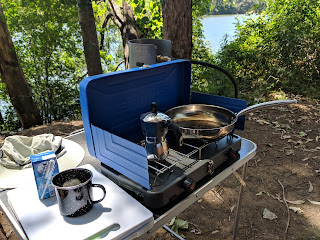 Dinner was fried sausages and salad again and I have no idea how I'm going to clean the frypan when camping.

After talking on ham radio for a while I noticed that the fridge had turned itself off to protect the batteries from over-discharge. It seems that the twin 12V batteries charged by the 100W solar panel do not have the capacity they used to and quickly discharge if the sun isn't on the panel. I farewelled my ham radio friends to hopefully keep enough power for the fridge over night.

It was a warm evening and three beers were consumed while watching the sun go down across the river. The only real negative about Cattai is that the river is used for water skiing, which seems to be a particularly pointless and annoying activity that I couldn't really characterise as a sport. At dusk they gave it up. 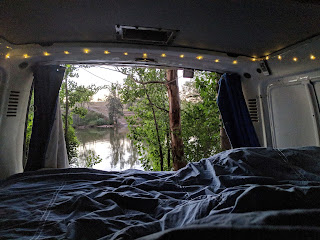 At about 8:30pm it was quite dark so I went to bed with the back door to the van open and slept under a sheet (with a doona nearby). My big fear was being tortured all night by biting insects and while I did hear two mosquitoes during the night I only noticed one bite on my palm by morning. After hearing the first insect I sprayed myself with Bushman brand repellant who supply the Australian Olympic team I see.

I parked a long way from the amenities block, hoping to avoid other campers who might object to my antenna. My plan was to pee into a plastic bottle and this worked well until first light when the bottle was getting a little full - the three beers were back in full.

Overall, I had a very good night's sleep. There were occasional plops and splashes from the river, a branch dropped loudly on the van roof at one point, but the other wildlife left me alone. Sleeping on an incline is a bit odd and next time I'll try to park a bit better. 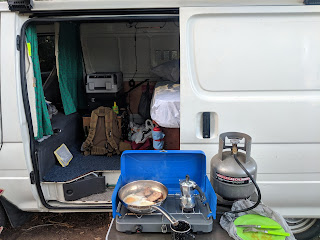 Breakfast was three eggs and bacon plus hand ground coffee. Thanks to Peter C for the home grown eggs. Morning temperature had fallen to 12C but the doona was enough to keep me warm despite the back door being fully open.

Battery voltage did come back up after I stopped the ham radio and the Waeco fridge ticked along most of the night but when I woke at 5:30 I noticed that it had shut down. When the sun came up the fridge woke and showed that it was 8C so the milk will be fine.

I have a big list of things to get or fix before the next outing in the van but clearly the batteries need attention - they need to run the fridge as well as lighting and ham radio and currently the voltage drops very quickly. The solar charge controller I put in (to replace the very basic one that came with the van) has always displayed a blinking battery icon and I should have realised that the voltage has always been low even under ideal conditions.

The first night was very pleasant and I look forward to improving the setup and having many more nights on the road.
Posted by Peter Marks at 12:09 PM