The new end fed antenna has obviously higher signals but also higher noise. The question is.. which antenna is better? 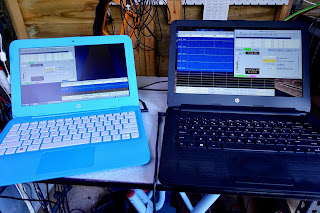 I now have three antennas that work on 40m (7MHz). The real test of an antenna, at least on receive, is the signal to noise ratio, and WSPR is a great way to measure this. I've set up three receivers, with three computers, all running wspr with the following call signs.

At the time of this first post, I'm surprised to report that my half G5RV is significantly better than the dipole or end fed for most reception.

Reception of VK2RG who is 48km away. 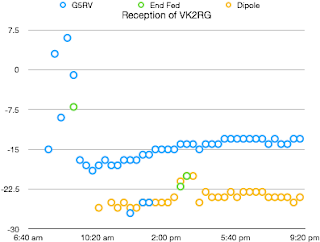 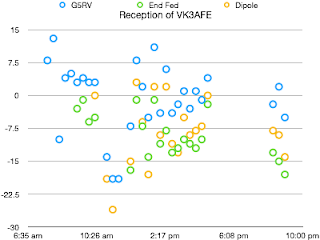 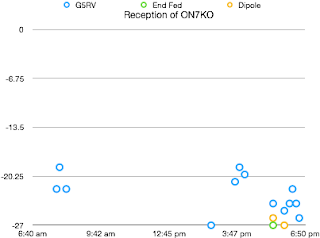 Comparing antennas is not simple. Each antenna is directional so performs better for stations in certain directions. Local stations are received quite differently to remote stations where signals come in from above. Some antennas pick up more local noise than others.

WSPR is a great tool for antenna comparison. Is there a better way to plot the data?

I think my analysis above is incorrect. Looking at all data over a 24 hour period it's clear that the big dipole receives more spots overall, which is a good measure of overall receive performance. 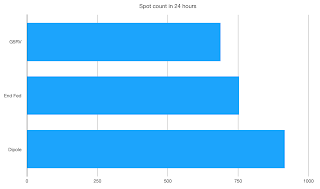 For what it's worth, here's the average received signal to noise ratio, spot counts and total distance of all spots received. (I don't actually think adding all S/N db figures makes any sense). 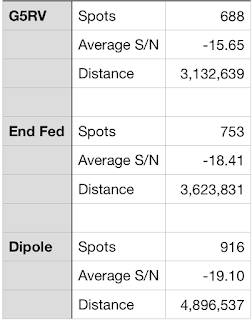 So in the end the dipole I think performs better even though signals (and noise) are higher on the end fed. John, VK2ASU, correctly points out that I haven't attempted to tune the end fed for 40m properly and that may well improve it.
Posted by Peter Marks at 9:05 PM