At QRP by the harbour I put up a dipole for 40m and John VK2ASU put up an end fed antenna which seemed to work better. My dipole was held up in the centre on a 6m squid pole and the ends drooping down to ground stakes at each end.

John's end fed went straight up to a squid pole and then over to a nearby tree. He cleverly used a bottle filled with water to throw the end up there (to save weight {although he also carried a lead mallet for the ground stake}). In the end John's antenna was more in the air than my inverted V.

Connected to my end fed inverted L it shows decent SWR on 40 and 20m. My transceiver's built-in ATU easily matched on both those bands. Compared to the 40m dipole signals are stronger but so is noise so perhaps the best way to compare is to run WSPR on each for a while.

Like John, I used an FT240-43 toroid and wound 0.8mm wire on it. Cable ties hold the core in place. The plastic box has a snap on base. 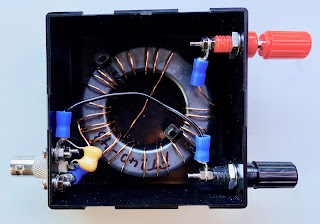 Thanks to all who went before. This is a very easy project to build and could be very handy in the field.
Posted by Peter Marks at 5:02 PM