The Raspberry Pi has turned in to a very flexible platform for dedicated computing tasks. I run one as an OpenVPN server, in the office we have one displaying server stats on a big TV. This week I purchased a PiFace board that provides a bunch of I/O controlled via an SPI interface. 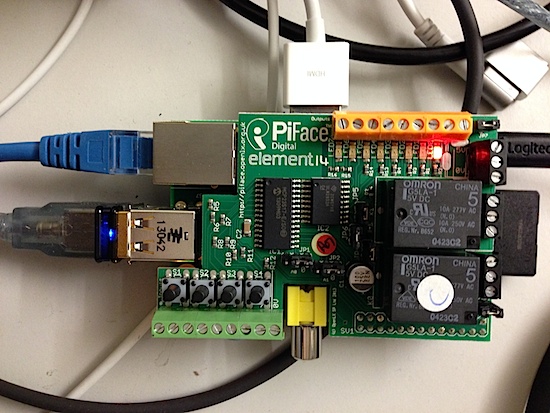 I found the documentation covering getting started is a bit confusing so here's my summary based mostly on the Element14 document.

And here's a simple python script to cycle one of the relays on and off along with the indicator LED.

#!/usr/bin/python
# flash an led with piface

So that's "hello, world", the rest is easy. (Control-C to get out of the loop by the way).

The board has 8 output bits. Bit 0 and 1 have relays connected to them, all have little on-board LEDs. They can be turned on or off like this:

There are 8 input bits, the first 4 have push buttons on the board. Here's how to read the first (0th) bit:

For that last Switch() probe I'm holding down the push button nearest to the edge of the board.