Travel has changed in 25 years 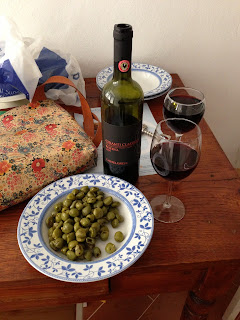 Twenty five years ago, Phillipa and I travelled to Europe together. We booked through a travel agent who suggested accommodation that met our budget - mostly "pensiones" as I recall.

I was always suspicious that the travel agents would recommend places with the best kick-backs.

In Florence I proposed that we marry and a quarter of a century, and two adult children later, we're back, but a few things have changed...

This time we booked with Airbnb where individuals rent out their apartments and are reviewed by clients. By the same token, clients are reviewed by hosts. We've paid as little as AU$80 a night for a complete flat which suits us just fine - it's great to be able to be able to make our own breakfast and do washing.

Technology has changed too. Last time I was here everyone had film cameras, now it's digital and there's a lot of people shooting on smartphones and sharing on Facebook. One of the key review points for a flat is the quality of the included internet and wifi - so far it's been pretty good (but not as good as at home).

The other fun toy is using a Fitbit dongle to count steps. On holiday, I do quite a lot of walking and am hitting up to 20,000 steps in an active day.

While free Wifi is quite common you have to seek it out and often it has annoying terms and conditions to agree to. In each new country I receive a string of scary messages from Telstra warning me about high roaming fees. Surely the cost is just a transaction fee which should tend towards zero. Is mobile data really a scarce resource? I think travellers are being exploited deliberately.

My strategy has been to purchase pre-paid global roaming data and to enable roaming data just when I specifically want to look something up - like on a map.

I'm also using off line maps from CityMaps2Go and travel info from Triposo.

There are commercial Wifi services too, I purchased a month of boingo but have not found it useful - the only place if offered service had 45 minutes free anyhow. 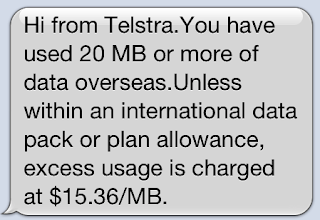 $15.36/MB, really! How on earth can that be justified? I do like the warnings but as I have purchased an international data pack it would be good to be aware of that.
Posted by Peter Marks at 1:07 AM

10810ifviewWhile in Germany ^ France last yesr I used a TravelSim which I purchased before I left. Its prepaid and very easy to top-up if you need to while on the go. It was quite simple to use and it always told you what your current "credit" was before making a call. I did have to keep an eye on my data usage though as this can creep away from you very fast. Definitely would use one again and cheaper than the current charges for roaming.
Denis