Peter, VK3YE, is an inspirational home brew designer and constructor. In a series of YouTube videos he demonstrates and then walks through the design of a simple double side band transmit, direct conversion receive, transceiver he calls the "Beach 40".

The minimalist QRP Transceiver group has drawn the circuit up (in the files section).

I started construction over the weekend but my oscillator didn't. 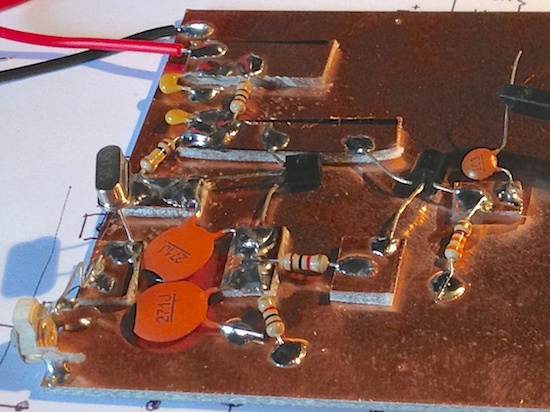 I'm using the "manhattan" or "paddy board" construction technique using bits of PCB cut with tin snips and superglued on to the base board as insulating islands. It's not as compact as "ugly" construction but the circuit is more obvious and it's very low profile. I'm thinking of stacking boards one above the other in the final box.

After some tips on non-starting oscillators from VK2ASU and VK2BLQ (who's also building one), I put a variable capacitor in place of the 390pF in the Colpitts oscillator and it started. 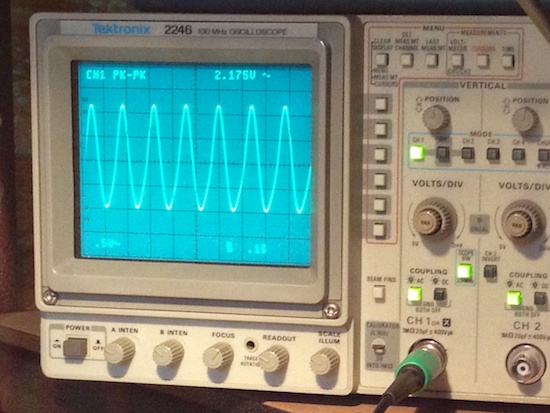 Peter's design has evolved through the YouTube video series, mostly in the receive audio switch to an LM386 but I am attracted to the all discrete transistor version if it can be made to work. It's much quieter in my shed than it is on Elsternwick beach.

Stephen, VK2BLQ, is also building and it's looking good (click to embiggen): 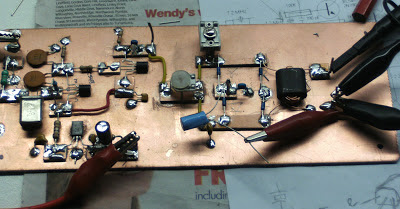 His CRO is much fancier than mine but I'm a bit suspicious of that waveform from modulation of a 1kHz tone on 7144kHz: 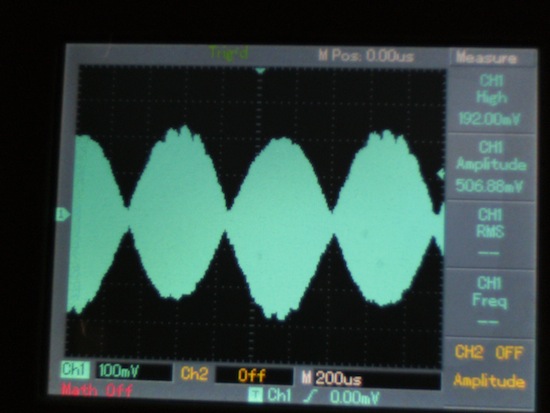 VK2BLQ is powering ahead of me: 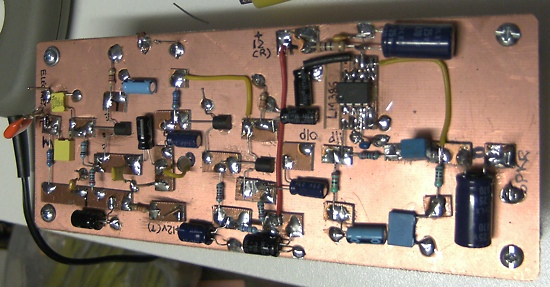 Update. Does this look right?

I'm still on the balanced mixer. I'm feeding in a 2.2V peak to peak 1kHz tone and here's the modulated RF output I get. 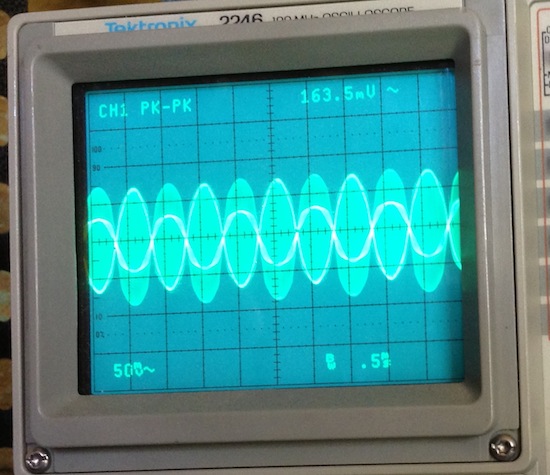 Seems very low level and somewhat non-symetrical. The variable resistor changes it but the trimmer capacitor has very little effect.

Stephen is powering ahead and now can transmit, here's his latest work (I wish mine was as good).

As can be seen on the CRO, the PEP is 20v p-p which is about 250mW or 1 watt if it were CW. I think the final transistor  is not right. It is  a CB radio final and should be good for 4W. Time to cook dinner and have a look later" 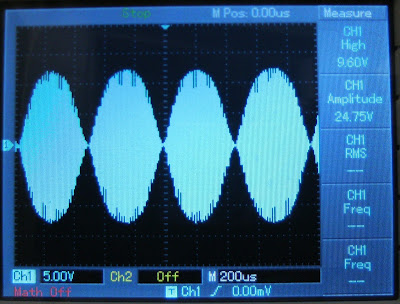 Like Stephen, I'm getting 20V p-p or 1W out which seems a little disappointing. 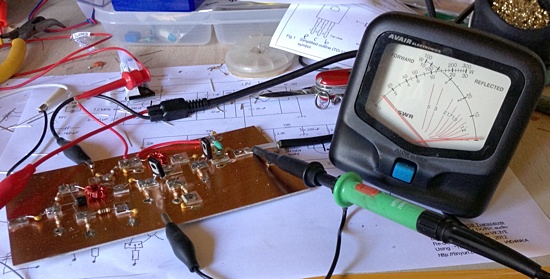 Don't worry I will find some heat sinks. Here's a top view: 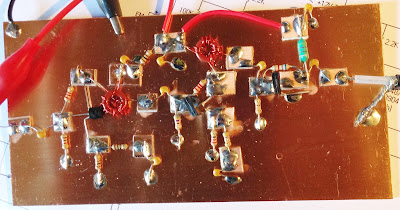 I should probably ask this question to Stephen, but, I do not have his contact details. Do you what kind of oscilloscope he uses? I see a screenshot or a camera shot in your post.

I have built the Beach 40 and my wave form looked just like yours, you can see it on the minimal qrp Yahoo group under "KB6QVI's DSB Tranceiver" in the photo section. I just checked into the Rag Chew net on the west coast of US with only 3 watts on the Beach 40, good audio reports.

Thanks Joel, that's encouraging. I'm planning to visit VK2BLQ and compare with his version side by side. He seems to get double the output that I get so I've kind of halted for now until I'm happy that it's working ok.

Have you made anymore progress on your Beach 40?

I have a short attention span and started playing with FreeDV. The Beach40 is still on the bench. How is yours going?