Comments on the HD AppleTV

I like the AppleTV. It's tiny, runs cool, has AirPlay and the remote is very simple. As soon as the HD version was announced I ordered online. Weeks later it had not arrived. I followed the status on TNT Express.

The "Card Left Not Home" is untrue. I was here and there was no card left.

When I rang to ask to see the "Proof of Delivery Image" they admitted that it was not any kind of proof of delivery signature.

Turns out when Apple has a major bump in shipping TNT outsource deliveries and they lose real tracking.

In the end they admitted that my package had been lost. Apple was advised. Rather than risk another lost shipment I cancelled the order, was credited, and I dropped down to the local Domayne and bought one off the shelf. 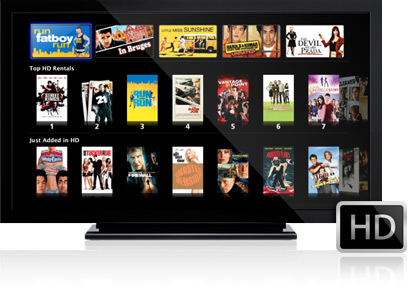 The user interface is 1080p and looks great. Although it came out before this new hardware, the updated software seems a bit of a step backwards to me. I find it hard to see which tile is currently highlighted, the indication is a thin blue glow line.

Last night we hired a movie in HD. Normally when we hire a movie they are ready to play within a few seconds, this one took over an hour. The status showing how long until it can play seems worse than it was in the old version and the estimated time jumped up and down alarmingly.

Compared to other TV boxes we have here, a Boxee, a WD TV Live, and a few no-brand gadgets, the AppleTV is certainly the best but not up to the standard I expect from Apple.

The hardware is great, I just hope the software gets some love soon.
Posted by Peter Marks at 3:12 PM