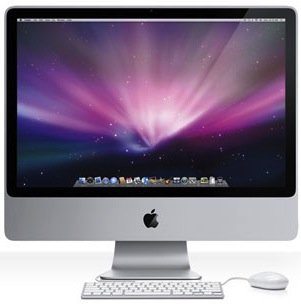 My wife's 24 inch iMac recently started exhibiting an annoying fault - it would, seemingly at random, just switch off.

Not a crash, not a shutdown, it just powered off.

My first thought was some sort of thermal problem tripping the power supply but oddly it did not seem related to the machine being busy or having been on for a long time.

I ran the Apple Hardware Test software which on very recent machines is built right in (you boot while holding the D key). On this machine it was on the second install CD, you insert the CD, reboot and hold the D key to get it.

Hardware test is a blast from past and uses the old System 7 GUI. I ran all the tests in the most thorough version, which takes hours, and everything came up clean.

The most reliable way to trigger a power off was rapidly launching a bunch of apps so that lots of icons were bouncing together. Very mysterious.

In the end the quickest way to trigger an instant power off was to run the iTunes visualizer. There's the clue - the graphics card.

The local Apple store took a few days and $600 to replace the graphics card and now we're good to go. I've never bought AppleCare, my Apple equipment has been fantastically reliable and the most likely problem - hard drive failure, I can fix myself. AppleCare on this machine would have been $268 per year so it would have broken even on this fault.
Posted by Peter Marks at 11:11 AM