Wonders of the Universe vs Cosmos 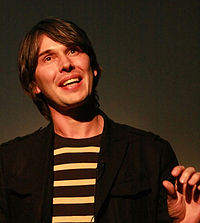 In recent weeks we've greatly enjoyed the "Wonders of the universe" program with Professor Brian Cox.

The filming has some annoying aspects: the sun is often in shot, presumably to remind us of this close star, but it is rather glarey.
There's lots of faux bad lens photography with blurred edge images and bogus lens flare.

Brian gets about, and is sometimes in remote locations for very little reason.

Having said all that, I really enjoyed the show and Prof Cox's presentation reminds me very much of a childhood hero - Carl Sagan.

Over the past few days, I've gone back and watched "Cosmos - A personal journey" by Carl Sagan. 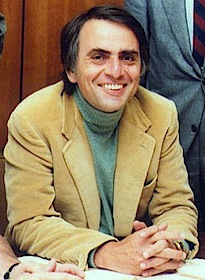 Given that it aired in 1980, it has stood the test of time very well. Some of Sagan's comments about global warming are amazing for their time, although his concerns about a nuclear winter have dated somewhat. The images of scientists smoking, sometimes pipes, in the workplace look hilarious.

The spaceship of the imagination is a little dated but he carries it off well. The sound track, in part Vangelis's "Heaven and Hell" is memorable.

Cox is a worthy ancestor to Sagan (who died too young at 62). I'm glad we have him on our screens.

I hope billions and billions of people get to watch these shows.
Posted by Peter Marks at 8:28 PM