I attended the Sydney PHP group's unconference last night held at Google. It's my first "unconference" although it's a pretty popular idea around the world.

Basically, rather than having formal presentations scheduled for the conference, the attendees write topic ideas on sticky notes which are then stuck on a board in columns for the groups.

We join the group with a topic of interest and while the person who posted the idea kind of moderates, it's really a free flowing discussion. 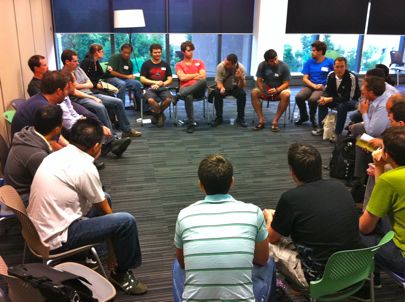 It worked better than I expected, although the groups were a bit big for detailed discussion.

I heard some interesting stuff and there were a few "alternative" views (people who don't like frameworks and would rather write everything from scratch every time for example).

Not being a user of PHP, it was fun to hear clues about how threatened many of the users are by the work being done in Django and Rails. (CakePHP sounds like a good response).

Thanks to the organisers and sponsors which amazingly included Google, Microsoft, and Yahoo. (Good work attracting that bunch!). DMSBT bought the pizzas.
Posted by Peter Marks at 10:28 AM