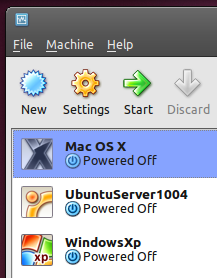 I have an irrational desire to see MacOS running on alternative hardware. It's always disappointing but never the less I was boggled to read that it's now supported on VirtualBox 3.2 and later.

Strictly speaking VirtualBox supports MacOS X Server which can be legally virtualised, but I created a VM, stuck in my Snow Leopard DVD and following just a few simple steps from here or here, now have a real Mac experience on my old Lenovo Ubuntu laptop.

Basically, you need to grab an Empire EFI boot ISO to boot from and it in turn sees the install DVD. You need to use Disk Utility to format the virtual disk and finally when you do boot you need to boot from the EFI ISO each time and simply press right arrow and Return to kick off the booting. 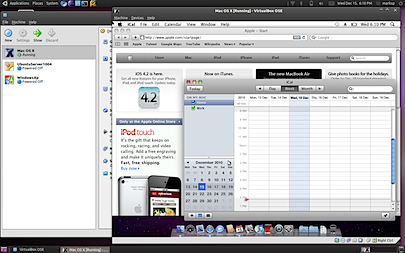 I did a normal system update without incident. Networking works right out of the box, no sound though. The mouse is rather too sensitive but usable. Booting and shutting down is rather verbose and it doesn't properly power off.

I would never choose this over my MacBook Air but it's nice to know it works.
Posted by Peter Marks at 5:28 PM