The presenters have an interesting style going where they have two presenters who have a (rather contrived) conversation as a mechanism for moving the talk forward.

After the morning's lecture style, we lunched with luminaries and then set to work coding for the afternoon. The day ended with some of us showing our work. 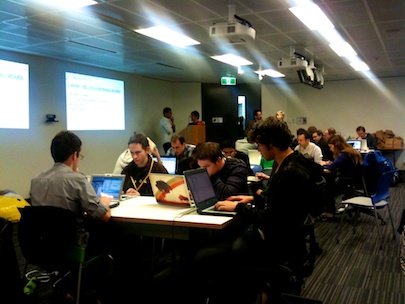 The conversion to the new API is quite easy although some things work a little differently. V3 is well thought out and the performance greatly improved.

FusionTables is a new product that lets you upload lots of data (up to 100MB at the moment) to Google's store and then visualise it both as charts and maps. Performance and ease of use are fantastic.

I mentioned how Twitter was used to good effect at the Python conference last weekend, well naturally Google uses Wave in a similar way, it's particularly good for audience chit chat and the distribution of links to the sample code. It's hard to imagine a conference without live tools like these.
Posted by Peter Marks at 7:33 AM