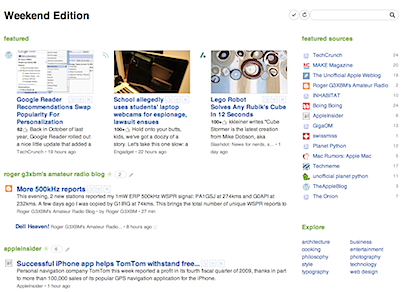 It's going to be a big year for news consumption. The challenge is not getting news, it's sorting and filtering it. As you see at the top, Google reader can sort your news by magic.
Posted by Peter Marks at 8:08 AM

Good update. One thing to contemplate is how important is news. You clearly are a news-junkie (each to their own). I try to operate on a news diet and often consider the value of particular media and what I'd really miss if I didn't catch the news for a bit. In many ways news is entertainment for intellectuals. It is good to stay current and be across what's happening in the world at large but times have changed. Google et al give us information on demand. Whereas in the past you had to actively follow the news to have a current grasp on matters.

Oh and when you are overdone with the news I highly recommend visiting NPR's All Songs Considered podcast - an excellent expose to new music across all genres.

I think it was you that referred me to WNYC's Radio Lab. I like it but sometimes feel the production is a little "over done", in particular the way they interview people and when they answer they fade them down and tell you what they said in voice over!