iPhone/iPod touch as an application platform 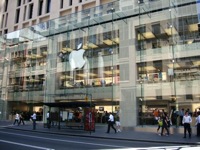 There's no doubt they're doing really well at the moment - 4.4 million iPhones in the last quarter alone, available in 70 countries, the iPod touch is the top selling iPod (but mostly because it's the only model in it's class).

I asked if they had any comment on the recent decline of the Microsoft Zune and Stan said he "didn't want to hit them when they were down".

The proprietary iPod connector is spreading too, aside from a few cars, it's now in some United and Singapore Airlines planes and apart from charging you can show the video on the seat back screen. Pity about the lack of WiFi internet though.

Quizzed about the bungling over restrictions on apps available in the store, Stan gave me the company line about seeking to protect customers from objectionable or poor value software. He kind of argued that reproducing a built-in software feature was bad value, I suggested that surely the market should decide that.

The built-in App store works well for iTunes and the iPhone/Touch, I asked when we would get a version for the Mac itself? Stan said that the concept has now spread to GarageBand and he sees "a lot of future in this style of store".

We're starting to see some traces of new iPhone hardware in web server logs so just for fun I asked about a new model and got the amused "we don't talk about unannounced products" laugh. 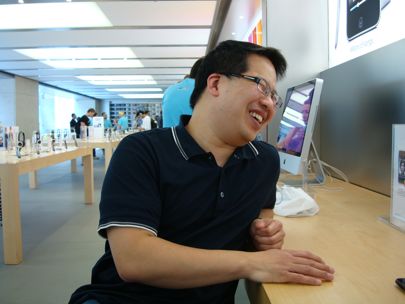 I expressed my frustration that the push service, expected last October, hadn't come out so things like staying logged in to instant messenger while the app isn't running are still not possible on the iPhone. No comment on that one of course. 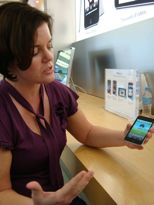 Christi demoed some nice apps including Sim City (which is said to be the most sophisticated version on any platform), a Ralph Loren collection presentation app, Hero of Sparta, and Word Fu which looks like a fun word game.

Great to see the local OzWeather doing so well in the store too - there's some wonderful success stories about small developers making good money through their applications.

A couple of pre-release games including Time Crisis from Namco were on show and I have to say that Chisti had done her preparation and seemed to play exceedingly well...

Platform vitality depends on the developers attracted to it. Apple has a good lead right now but Google Android, and Palm Pre are attracting a lot of developer interest. One possible weakness for Apple is that their developer tools aren't cross platform but it's amazing how over-represented Macs are amongst software developers at the moment.

My thanks to Stan and Christi for their time.
Posted by Peter Marks at 5:18 PM