80m dipole antenna back up

Over the past year or two I've been incrementally improving my HF antenna situation here. I've pushed higher and higher and on a windy night early in the week it came down.

Luckily I still had a spare line over the branch of the gum tree out the back and was able to get it back up again pretty easily (the hard part is getting the line high into a tree). 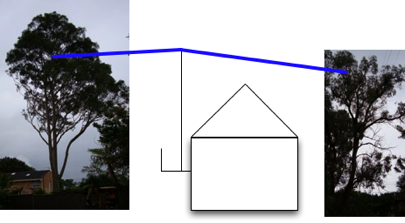 There's a magnificent tall gum tree in the neighbour's yard at the back and a tree in the street in the front. Happily the power runs down the other side of the street.

The central support is a netball hoop base, with a steel pipe and then a long two part extension from a pool cleaning pole. It's guyed on the sides and the dipole forms the other guys kind of.

The antenna consists of a 40/80m trap dipole and I have a 20m dipole off the same balun going at another angle. The extra 20m dipole detuned the 40m part a bit but hasn't affected 80m.

In fact I'm getting terrific reports on 80m with many stations in a net saying I have the best signal of the group. In the Friday night, 8:30 QRP Natter Net on 3.615MHz, both Barry, VK5BLS and Gerard, VK4TGL were complimentary. I dropped to 25W and was still quite strong.

As Gerard said, "if your antenna stays up - it's not big enough".
Posted by Peter Marks at 8:34 AM