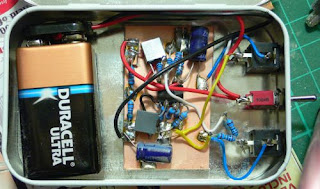 I read Alastair's post about high quality headphones with great interest.
After finding the excellent Headwize site, I rushed down to Jaycar this morning for bits, and built the cmoy headphone amplifier (in an Altoids tin, with space to spare, as shown above right).
What really got me was the data sheet for the OPA2134 operational amplifier from Burr-Brown which says, in part, "The distortion produced by OPA134 series op amps is below the measurement limit of all known commercially available equipment."
Further: "THD+Noise is below 0.0004% throughout the audio frequency range, 20Hz to 20kHhz".
My experience..
It's hard to explain, but this little amplifier gives a real sparkle to the sound. It's not artificial or boosted in any way, but things like cymbals sound quite different - better. Sometimes there is too much bass for my liking.
Other notes:
So, one more thing to carry on the train.. thanks Alastair.
Update
I've spent a very entertaining evening re-importing some of my old favourite CDs at 256Kbs/AAC and of course listening to tracks in different headphones. There is a story around about how your brain works harder listening to music which has been compressed for space (no, not level - that's another topic). Basically masked parts of the audio are removed to reduce the data rate, but in fact you miss those parts of the signal and have to imagine them yourself.
In my youth I was very interested in "hi fi" and well remember the arms race that would follow the upgrade of one component in the system: a new moving coil cartridge would show up the noisy amplifier, upgrading that would show up the speakers, and so on.
Recent years have seen my music move totally on to computers and mostly in to headphones. Loud speakers are always a compromise existing as they do in a room that resonates to some extent. Little computer speakers have advanced tremendously in recent years and work damn well at low level. Headphones can reveal detail and texture in an audio track that will be missed on even the most high end speaker system.
With the falling cost of storage it's now time to re-import my CD collection at a higher bit rate - or perhaps I should just bite the bullet and go loss-less at last.
Update 2
Hmm, not sure if the higher bit rate AAC is worth it for me. I created this test which chops back and forth between 128Kbps and 256Kbps every ten seconds and I can't tell the difference. Of course I'm getting old and probably not listening in the best equipment.
Posted by Peter Marks at 9:00 PM

I'm also playing around with different encoding, will let you know how it goes.

Thanks, yes do let me know how it goes.

Very nice your blog.
do you know planet ham??
Planet Ham is a website designed to aggregate blogs produced by Amateur Radio enthusiasts. The aim is to provide a central directory of Amateur Radio blogs so that interested browsers can visit subscribers sites and read about the various aspects of the hobby in detail.
To add your blog to the Planet Ham feed please email the web address to webmaster@planetham.com