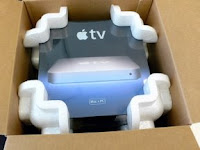 Issues:
I'm happy with the product and very much enjoyed watching video podcasts in bed last night. Can't wait to buy a TV show or movie.
Posted by Peter Marks at 1:25 PM