Old friend and new ham, Richard, VK3LRJ,  has been setting up his station at his off-grid property near me at Drummond. We put up an off centre fed dipole over the shed which houses the shack and also his solar and battery installation. The noise level was very bad. 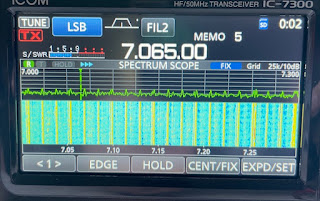 The next step was to move the antenna away from the shed via a run of suspended coax. Noise was lower but still not great.
We quickly identified that the culprit was the Australian Selectronic SE42 inverter. Richard spoke to the supplier and they suggested "servicing" the bypass capacitors. 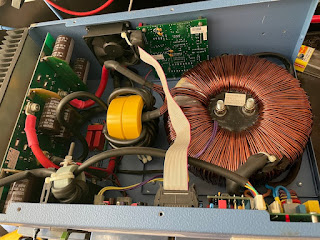 A high power inverter is an impressive piece of equipment. It seems that the electrolytic capacitors you can see on the left degrade after ten years and should be replaced. This has had a noticeable effect on the noise floor. 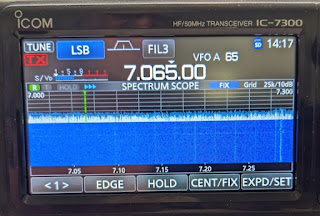 We also tried a noise canceller which did work better than it did for me in the suburbs, presumably because the sense antenna could pick up the noise signal effectively.
The next step was to add an EMI filter in line with the mains coming out of the inverter on its way to the radio shack. 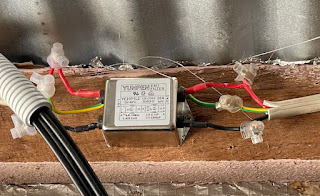 This has helped even more. 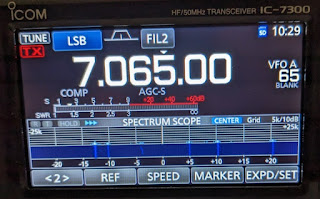 Richard says there are still noise "farts" at S3 but overall it looks much much better. We're going to run WSPR to compare with my place.
Posted by Peter Marks at 9:37 AM

Which inverter is Richard using? I am interested in the resolution for my solar inverter.

The brand is Selectronic but I'll update with the model when I get it.

I wouldn't have expected old electrolytics. Guess they degrade and no longer filter the high power pulse noise. Worth remembering. -- VK3HN.