I've had another shot at the simple end fed half wave tuner and it's even better than yesterday's effort. The 12 way switch selects the input tap on the toroid and the wiring is quite neat as the toroid sits right on the back of the switch. 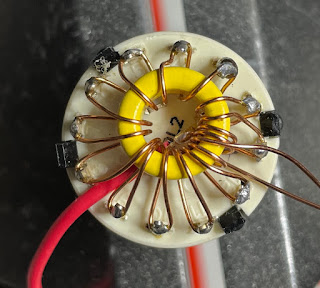 There are three turns on the earth end of the toroid, then twelve turns with a tap going out to the switch on each turn. There are three more turns at the hot end of the toroid. In use I find that the single turn selection is a bit too fine but it does seem to tune quite widely on bands over 40m with just a short wire over the clothes line.

Again I've used a $1 box from Woolworths and I plan to use more of these boxes in the future. 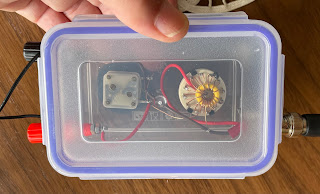 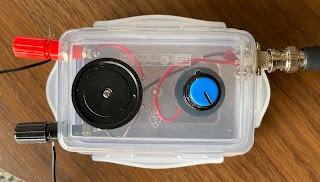 Being my second attempt I positioned the terminals better so that they didn't hit the internal components or the lid clips. Here it is nicely nulling the SWR.

I couldn't quite tune my short wire to 40m so I've had another go at the tapped toroid and this time it's 3 turns from ground, and then two turns between each of the switched taps. 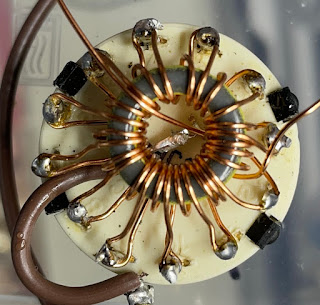 This gives more range. I think at the low end it should be one turn and more between higher taps would work.

Ross, VK1UN, thinks I should try an air wound version and made this prototype: 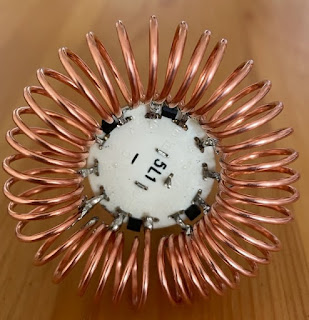 Most of the world works on logarithms and exponents. Maybe your taps ought to go along with that, close together at the bottom end and then spreading out proportionally to how far up you've gone...
Bob Wilson, WA9D