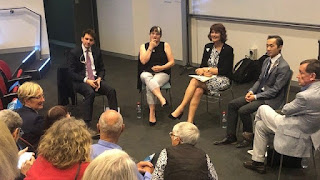 Jemima Garrett, journalist and co-founder of Supporters of Australian Broadcasting in Asia and the Pacific

David Hua, head of International Strategy at the ABC

Kean Wong, Journalist and author (calling in from Malaysia)

You can listen here.
Posted by Peter Marks at 12:52 PM