80 years of international broadcasting by the ABC was celebrated this week at the headquarters in Ultimo, Sydney.

Geraldine Doogue was the MC for the evening. She described the International division as “Taking Australian culture beyond its shores”. Doogue described ABC International as the very best of the ABC and said that the people who work in it have a sense of pride in Australia and work out how to present it to the world.

Ita Buttrose, ABC chair, said “The birth of Australia’s international broadcasting service came at a time of global upheaval, uncertainty and disruption. Australia seemed far removed from the epicentre of conflict in Europe, but the technology of cable and wireless brought the war in to living rooms across the country.” 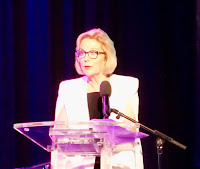 As Ms Buttrose noted in her recent speech at the Lowy Institute, radio technology also gave Australia the opportunity to speak directly, for the first time, to its near neighbours, countering the propaganda and fake news of the day.

Buttrose referred to the book “This is the ABC”, a history by Ken Inglis, where the author noted that following World War II, when it looked like the ABC’s international service would be drastically cut, the government was warned that if Australia gave up its international frequencies, someone else, perhaps the Russians, would move right in. That was enough to change the Government’s mind and in the post war period, Radio Australia flourished as an integral part of the ABC and served as a vital and effective diplomatic tool.

“Just like the early days of international broadcasting, a disruptive world order, rapid technological change, the growing influence of super powers in our region, and the use of media as a geopolitical tool; are all still very familiar to us today.”

The ABC International service of today is quite different to its past. (Hint: much smaller, and lacking shortwave -editor). Some changes are a natural evolution due to technology and audience demographics, but the current form has primarily been brought about by necessity.

However, Ms Buttrose is optimistic about the future. “In recent weeks, both Prime Minister Morrison, and the Minister for the Pacific and international development, Alex Hawke, have spoken of the importance of marshalling resources to engage with and influence the region and the wider international community”.

“The Minister for Foreign Affairs, Marise Payne, has encouraged Australian communities and institutions to take Australian values to the world in the interests of promoting peaceful, open and inclusive international relations”.

Ita Buttrose went on to say “I believe the ABC has a fundamental role to play in achieving these objectives. We are Australia’s trusted voice in Asia and the Pacific. We have a proud record of achievement, telling Australian stories, reporting fairly and fearlessly, presenting Australian culture and education, and delivering valuable information in times of crisis, and we’ve done this for eighty years”.

“Crucially, our point of difference from state broadcasters and other international media is that the ABC has an independence from Government and the longevity to secure a foundation of mutual trust and respect. An unmatched expertise and understanding. We talk with, not to, our neighbours”.

Buttrose argued that if Australia is to step up in the region, the ABC is an existing platform from which to step up. 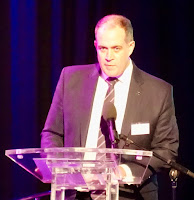 “ABC’s international services are a national asset and they have been for a vast majority of the ABC’s history. They’ve been connecting with Australians overseas, sharing Australian stories with the world, and letting our neighbours in the Indo-Pacific region know that Australia is a trusted friend. We’ve done that over multiple generations”.

Anderson commented that the international TV service, “ABC Australia”, is available in 80 territories across the Indo-Pacific region. ABC Radio Australia is available via FM relays right across the Pacific. Digital stories published in four languages reach people all over the world through web sites, social media and apps.

“The importance and relevance of international media is as important now as it was on the 20th of December 1939 when Sir Robert Gordon Menzies’ voice echoed across the ionosphere. The more things change, the more they stay the same. Misinformation and fake news are a threat to the rules-based order that we have across the globe”.

Pressure on the ABC and public broadcasting continues.

“Let’s not forget our foreign correspondents who report to and from the region: from the legendary Sean Dorney, Jemima Garrett, Natalie Whiting, Melissa Clarke, and Liam Fox”.

My thanks to the organisers for inviting me.

There is a documentary about the history of Australia's international broadcasting. There's even a story about the making of the documentary.
Posted by Peter Marks at 4:22 PM