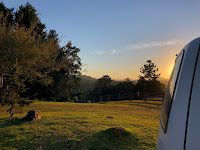 My first trip in the van since returning from crossing Australia. The battery that powers the fridge and  lights was no longer holding charge. While driving the fridge would run but as soon as I stopped the voltage dived to 8V and the fridge would turn itself off.

When I took a closer look there was melted plastic on both sides of the battery. It looks like some cells have short circuited. The battery has been in use either in my shed or in the van for ten years so it's no surprise that it has given up the ghost.

I haven't seen a battery fail this way and it's pretty alarming. 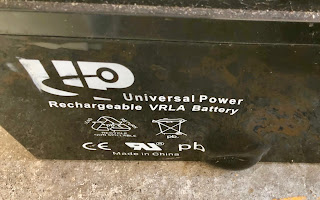 I've replaced it with a 120AH deep cycle battery which will hopefully last me at least four years.
Posted by Peter Marks at 4:52 PM