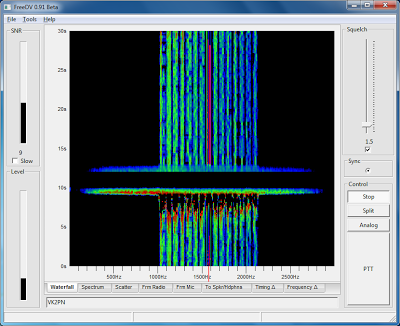 This mode uses about half what a sideband radio would use and is perfectly intelligible when it's working. The other bonus with a digital mode is the complete lack of background noise.

Here's how I look to Patrick on his panadapter: 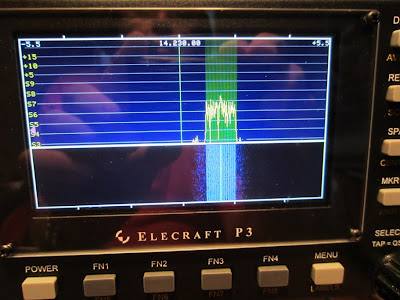 Patrick has written up our contact from his side on his blog.

FreeDV is very easy to get going on Windows, I had a go at building it for Ubuntu Linux but ran into a few bumps in the road.

Here's a video from my end where you'll hear how Patrick sounds to me as we both reduce power.


After the contact with VK2PN I was also able to talk with Graeme, VK4CAG pretty well.

So, this is an extounding day! Great work by David Rowe and all those involved. It's fantastic to have a good quality low bit rate voice codec that is public domain. This is a great thing for Ham Radio and I would think will have reverberations through the voice over IP business as well.

Stephen, VK2BLQ, has just pointed out that FreeDV seems to run well under Wine on Linux. 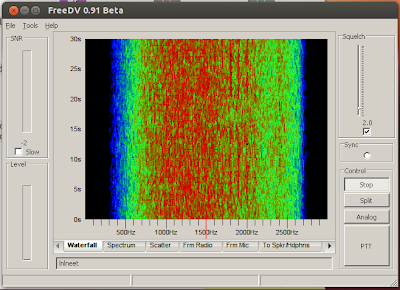 The latest code from subversion now builds smoothly on Ubuntu 12.10 but for me the audio stutters for some reason so I'm still using the Windows version under Wine. I just heard VK4BD on 14.236 but couldn't decode more than the call sign.

Update - FreeDV on MacOS via wine

FreeDV appears to run ok on MacOS under wine but again I'm hearing audio stuttering. It looks pretty good though: 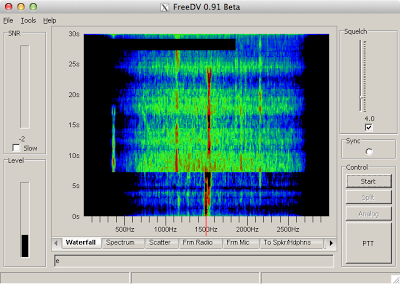 I installed wine with brew. Note that to get it installed you need to do the following:


Then you cd to the directory with freed-windows and wine freed.exe

I think we heard your FreeDV signal and then had our own VK5 to VK2 QSO just afterwards.

What can I say, fantastic work getting codec2 integrated in to an easy to use application.

Patrick and I kept reducing power so you might have had a bit of trouble towards the end.

Thank you so much for this fantastic contribution to the state of the art.

The download links are down the bottom on the freedv.org web site. At the time of writing the windows link is http://files.freedv.org/freedv-windows.zip but that may change in the future.

how do i use freedv for loopback purpose, i.e i dont want to transmit voice i just want to hear my own voice.
What bit rate is freedv using and how to modify it?

Archit, there are command line tools that you can use to encode and decode audio. Perhaps what you should look at.

Codec2 can run at a number of different bit rates selectable in the gui or on the command line.