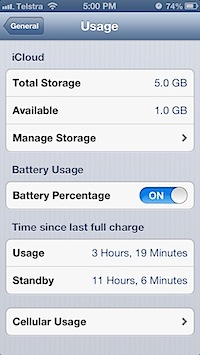 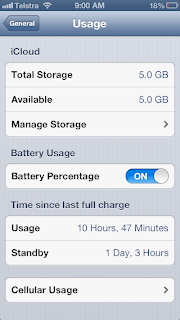 I have Mail switched to "Fetch" on my phone and desktop: that is, the mail application will only check for new mail when I tell it to. I'm not interested in being interrupted by new mail. Incidentally, I also have the phone in silent or Do Not Disturb mode most of the time: the phone is strictly for my convenience, not everyone else's.

I get a day or two out of my iPhone 4 even with WiFi and Bluetooth left "on". I've told it to forget networks that I don't care about anymore, though I do run the battery dry quickly on "down" days when I'm constantly polling Facebook and Twitter for more external validation of my existence.

The greatest change to my iPhone 4's battery life (and my lifestyle, and my productivity at work) came about by simply turning off polling for mail.

It's interesting to see that you have consumption/heat trouble due to LTE coverage. I'll keep that in mind should I decide to upgrade.

Thanks for taking the time to add some sense into the discussion of iPhone 5 battery life problems :)

I have seen people complaining about bad battery life so I thought it worth posting some specific details. As you say I think the culprit is mail polling and the repeated network connections that result from it.

I was polling for mail every 15 minutes. Big mistake.

As for bluetooth, I think it's very low power, particularly on iPhone 5s as they support version 4.

Good morning Peter, I have the 4S and the battery life has been much better than my previous 3. I had heard about shutting down the app's that were not running did help nice to know that is but a myth. With the 4S I do have to plug it in on the way home from work as I am at around 30%. I too looked into the battery change out when I had my 3 and to me it looked a big long and drawn out for just a battery.
Thanks for the tips
Mike

Replacing the battery in a 4/4s is pretty easy. I bought a kit on eBay and it came with the two alternative tiny screw drivers and a plastic tool for disconnecting the connector.

I think it was much more difficult withe the 3.

Your mileage may vary.

I think that Airplane mode would turn wifi off though.

No, you can turn WiFi on again after going to airplane mode.