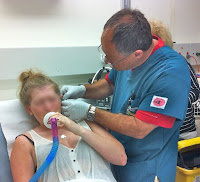 My daughter decided to get some new ear piercings a few weeks back. One went through cartilage near the top of her ear.

The ear went red and swelled up so much that the stud disappeared into the wound. Our GP had a go at getting it out but in the end sent us on to hospital emergency, which after the minor surgery, admitted her for forty eight hours.

Mona Vale Hospital did a great job, and it's much quieter than Royal North Shore (where I took my broken toe a few years back).

We've had a very good run with the kids and illness or injury. My daughter hasn't been to hospital since birth and there was some messing with computers to figure out that she had no entry in their database.

If your kids want piercings that go through cartilage you can tell them from us that getting them out after an infection is a very painful operation. Infected cartilage is less serious than a bone infection but still quite serious.
Posted by Peter Marks at 10:06 AM

Good evening Peter, my son had his lip pierced and it went ok but now he does not have it. The hole is closed but the scare is still there. But as for my two kids....I have been many times to the ER to get them all fixed up.

I've heard that girls cause fewer trips to hospital but maybe piercings are the exception. It's a mystery to me why anyone would do that to themselves.