"OMG Steve Jobs" was the SMS from my daughter. I'd been watching Google Reader only minutes before and it was clear this was set to be the biggest, and fastest spreading, story to date. 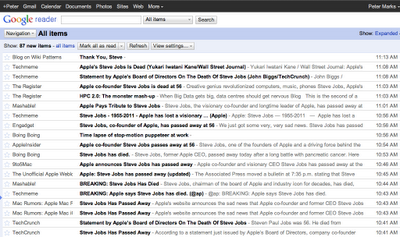 I feel like I felt in 1980 on hearing that John Lennon was killed.

News has evolved to be super-efficient in the last few years. A few friends and a few family sent SMSs, I chatted with others via instant messenger. Apple's home page was elegant. 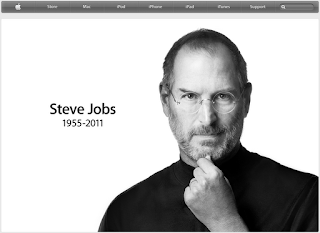 I notice the image is called t_hero.png, but maybe that's normal.

The story is the lead everywhere. 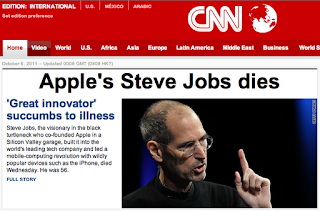 Ironically, our prime minister, at today's "Jobs summit" made a statement and the US president quickly had something to say. 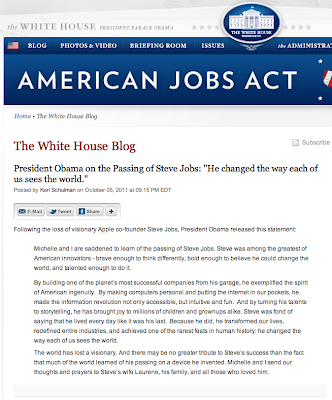 Nice of them to pass a "Jobs act" too.

There's some wonderful commentary starting to appear. I like Walt Mossberg's piece in particular.

I watched the iPhone 4S keynote yesterday, (thank goodness he held on until after that was over), Tim Cook did a fine job backed by a solid team. There was a downbeat feeling about the presentations, I wonder if they knew how close the end was, or perhaps they knew the wishful rumours of an iPhone 5 would mean they'd be unveiling something a little disappointing.

Even today, thirty years after Lennon's death, I wonder what he'd say about Occupy Wall Street. I, for one, will be thinking "What would Steve do" for a long time to come.
Posted by Peter Marks at 12:32 PM