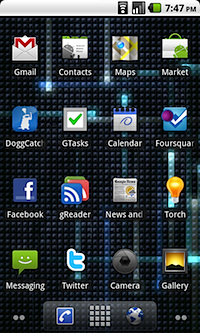 Gartner group is predicting that the war between mobile phone operating systems will end with Google's Android on top.

I decided to forego the iPhone 4 and try living in Google land for a year or so. As previously blogged I purchased an HTC Desire. After my intense dislike for all the Telstra rubbish it came with I rooted the phone and have been installing each version of the OpenDesire build as they came out.

Until this week it's been a pretty good experience but for some reason the phone started hanging every few hours. Unfortunately I broke the programmer's rule and made two changes at the same time - updating the Radio firmware and the OS, so I couldn't be sure which was the problem.

Anyhow, the firmware that seems most popular is CyanogenMod. One difference is that the Google apps need to be installed separately.

24 hours later all seems to be well with the phone. I can't blame OpenDesire as it may well be that simply wiping the phone fixed up some sort of corruption.

For some reason my phone burned through 105% of my 200MB data allowance last month. I can only think that it was something running in the background sucking down podcasts when I didn't know. Everyone yelled at Apple for not doing multi-tasking but when you get what you wish for sometimes it not what you want.

I found that on Cyanogen and also then when I switched back to OpenDesire, the phone would work fine for a few days and then hang. It's still alive at some level because the message LED would flash, but nothing would wake it except removing the battery.

Now I've switched to AuraxTSense_7.8.1_Official_OTA_2.2_FRF91 and radio 32.44.00.32U_5.09.05.30_2 and 48 hours in all is well so far. One clear improvement over the others is that when I start using the phone and am in a Wifi area that it knows about the phone now uses the Wifi first rather than starting on 3G data and later switching.

Unfortunately I am seeing some intermittent problems re-connecting to wifi. Sometimes it seems to be connected but apps can't load from the internet.

There are a lot of cheap Android tablets on eBay and thankfully my colleague Dennis saved me the trouble and bought one. 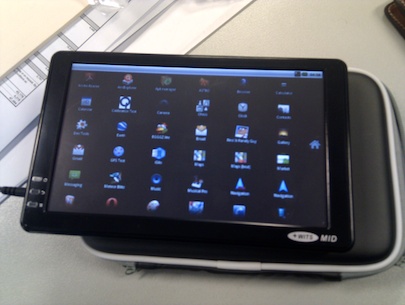 Yes it runs Android, but the touch screen is so bad and the OS is so unresponsive that a quick play with the gadget leaves you with the impression that it's only use is as a bad digital picture frame.

Android may well being on every device on the planet but it may end up with a reputation for being dodgy compared to Apple's closely curated world. I do miss the iPhone and have recently ended up carrying an iPod just for podcasts.
Posted by Peter Marks at 8:18 PM

Hi Peter,
Thanks for the android information.
I have been looking for a tablet PC in the last week and love the iPad hardware (once it has usb etc etc ) but it seems to be difficult to do even basic operations such as viewing a text file.
The procedure for loading information on the iPad just has to be improved before people like myself who are used to being able to easily load and view different formats of video and text information will consider it a viable purchase.
If it had the functionality of windows and a USB load facility, I would already have one.
As it appears at the moment, android will win the tablet war by default, as Apple just does not seem to get it.

Hmmm. I think that Gartner have been known to be wrong before. ;-P

I personally see a more level playing field evolving including Windows 7. MS are not to be discounted!