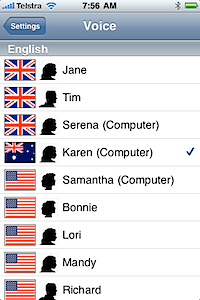 When the TomTom GPS navigator software was released for iPhone I didn't hesitate to buy it so that I could reduce the gadget count by one. It has been a little disappointing, not only the clunky user interface (compared to the high standards I expect from an iPhone app), the poor GPS reception (fixed now with the car kit and it's magic antenna), but mostly because it didn't come with "computer" voices.

Computer voices can pronounce the name of the street you need to turn at. This is really important as particularly in built up areas the GPS can get your position a bit wrong due to reflections.

I'm happy to report that the update released yesterday includes computer voices and the software now speaks road names. It made a right hash of Conemara Avenue, but then so do all the other GPSs I've tried.

This update has numerous improvements, including better integration with the rest of the iPhone. Great stuff.
Posted by Peter Marks at 7:00 AM