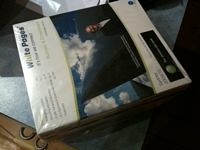 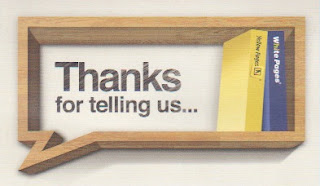 So, good on you Sensis at last.
Posted by Peter Marks at 7:08 AM

I head the Sustainability area within Sensis and noticed your blog.

However, we don’t want to deliver directories to people who would prefer not to receive them. A systematic process for people to advise they would prefer not to receive a directory was introduced in 2005. The details on how to change your preferences are on the first page of the Yellow Pages directory and in the front section of the White Pages. Our distribution system has also improved significantly in recent years with GPS tracking of directory distribution to increase accuracy and accountability.

Without listing all our programs and achievements - put simply Sensis strives for social, environmental and economic sustainability in all operations. Part of this is our commitment to minimising the environmental impact of our products. This includes using recycled materials in the production of our directories, recycling leftover paper materials from our production process into things like insulation and kitty litter, as well as encouraging people to recycle their old directories. Last year, 96% of old directories recycled or reused. We are also continuing to work on further improvements which we look forward to announcing in the coming months.

More recently Sensis also became a member of the Forest Stewardship Council and renewed its partnership with Planet Ark to present recyclingnearyou.com.au – a one-stop recycling website for Australians which has attracted over 3 million unique users since we launched it in 2006.

Our Sustainability Report also details much of our product and sustainability credentials (pdf and z-mag available online at http://www.about.sensis.com.au/community/corporateresponsibility.php).

Please feel free to email me if you’d like further information at any stage (Jillian.Riseley@sensis.com.au). Again, I’m happy to speak with you about our credentials or put you in contact with our distribution team at any stage.

I've written to her with my address and am looking forward to any news.

Jill wrote: "I've asked our distribution team to look into this and I'll ensure we get a response asap."

Many thanks Marxy for pointing me in the right direction to stop those annoying unwanted phone books from arriving on my doorstep every year.
Much appreciated.

Well, good luck. I have failed to stop them coming so far. Printed phone books appear to be compulsory. Jillian Riseley went to investigate but never reported back.

My guess is that while Sensis keeps a register of who doesn't want books, the delivery contractors are not motivated to take the time to look at that list.

Good luck trying to stop the books. Ut doesn't matter what Jillian or any of the other headless chooks at Sensis actually say to you, they simply do not know what is going on inside their own four walls. Take it from me, I have a huge amount of first hand inside experience. Sensis is the only place I ever worked where nearly every single thing they touched ended in an error. And as you can see, Jillian used her response to your blog as an excuse to plug their business and how great they all think they are. There's no genuine concern for you there, just an exercise in damage control. Remember - Senseless does not care about anything but $.