I've been listening to Dave Winer and Jay Rosen talking about rebooting the news so I'm primed for this.

As I write it seems that the election in Iran is out of step with the will of the people but the story has come out, not in the traditional media, but via "process journalism", where the story evolves in real time rather than being presented as the full story at the end. 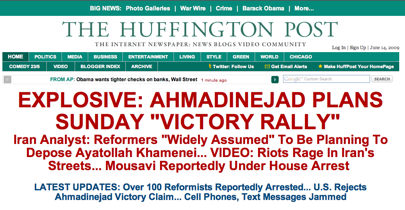 Despite the fact that the mobile phone network was either deliberately disabled to prevent SMSs or quite possibly overwhelmed, news is coming out on Twitter and YouTube.

The Daily Show's story on the New York Times last week was very timely. One thing the Times said was along the lines of "the Huffington post doesn't have international bureaux.." and yet tonight we see that they have the best coverage.
Posted by Peter Marks at 9:41 PM

This whole thing had me thinking about the Daily show,too. Funny! "Old News" CNN was way off on this one,though

Stratfor changed journalism 10 years ago with the Kosovo Crisis coverage. This isn't much of an "achievement"

The BBC did a fine job over night (my time) but it was a bit spooky when they started reading out Tweets.