Baz Luhrmann is the Wizard of Oz 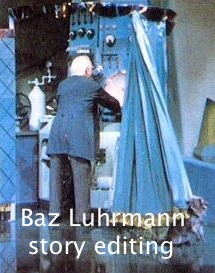 "Something tells me we're not in Cairns any more.."

There's much to like about this film, the photography of the wonderful scenery in the Kimberly is fantastic.

The cast of familiar great Australian actors is terrific. The music is used skilfully to manipulate the mood. The visual effects are as convincing as we can have today (anything's possible).

So many good ideas are in there, it's overflowing. Any film that goes 2 hours 45 minutes is going to be draining, but there's a point in this movie where I lost my motivation to stay on. If he'd had an interval many wouldn't have returned.

Baz knows how to make a big Hollywood epic movie, and I admire the talent he's gathered. I loved the references to other great films, visually, musically, and even actual clips of the film in one case!

This isn't "The Wizard of Oz", I'm sure it will do very well, but I won't be hanging out to watch it again in ten years.

When it ends up on TV, my guess is that they'll split it over "two big nights" and they'll do all that what's coming up snippet stuff to drag people over to the second part.