Rather than flying or driving, caught the train 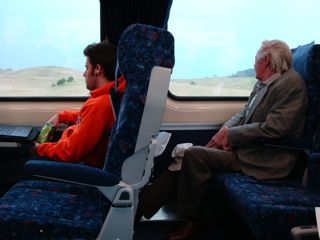 As the price of petrol climbs my theoretical enthusiasm for public transport increases.

This weekend the family made the trip to Coffs Harbour. Normally we would either drive or catch a plane but along with my fun-loving sister and brother-in-law, we decided to catch a CountryLink train from Sydney Central.

We decided to pay a little extra and go "first class". The best thing about the trip was meeting other passengers. Along the way we had some great conversations and heard some truly amazing stories that I won't betray here.

The staff were really nice and seemed to be even having some fun. 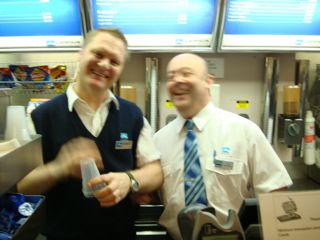 The seats were rather hard and next time I'd consider taking an inflatable cushion of some sort. The trains themselves are very modern and even had a payphone on board (mobile reception was decidedly patchy along the way).

The wine was pretty good (served after noon) but I'd have to say that the food was hearty but not exciting. Here's the roast pork. 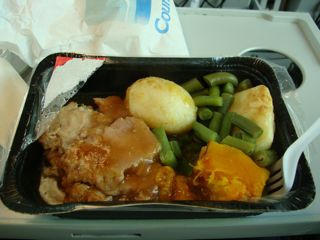 Sydney to Coffs Harbour took nine hours whereas the trip by plane is about two all up. I found myself strangely tired from a day of sitting in a chair, but definitely enriched by the experience.
Posted by Peter Marks at 8:49 PM

Email ThisBlogThis!Share to TwitterShare to FacebookShare to Pinterest
Labels: travel