My sister Jane once asked for a horse because "everyone in her class has a horse".

Sometimes it feels that way with 3D printers. Several people have recommended the Creality Ender-3 printer as a good starter model. I ordered the Ender-3 v2 and paid AU$360. (Excellent value).

What arrived was a well packed kit. The base is already put together but you need to do the rest. 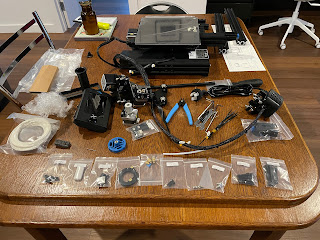 They do supply everything including tools such as hex keys, screwdriver, spanners and even side-cutters (which are used to cut filament). I was a bit daunted by the process but took my time and it came together. 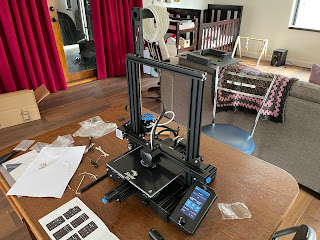 STL files can be loaded from a micro-SD card. They supply a card but my printer wouldn't read it for some reason. I formatted another card FAT32 and that worked fine. I was unsure that I'd got the base level enough but my first print, the Chinese cat you see below came out impressively well: 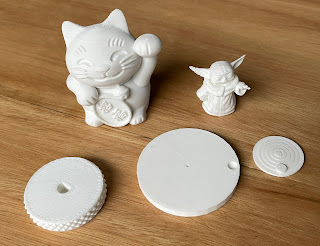 As you can see from my early prints here, my first use for a 3D printer is to make tuning knobs for radios. (Oh, and toys for the grandson).

There are many pre-made models ready to slice and print at Thingaverse, Thangs, Printables and others but I want to be able to design my own.

I scanned my face with the iOS app "3d Scanner App", exported to STL, imported in to Blender to tidy up and printed it: Blender is open source software that works well on Linux, macOS, and yes, even Windows I hear.
It is amazing and capable of high quality 3D rendering and animation. Much more than I need.
Just enough Blender skills took a few days but now I can add objects, size them and punch holes in them with other objects. The trick here is to use a boolean between the main shape and the shape that will be the hole. 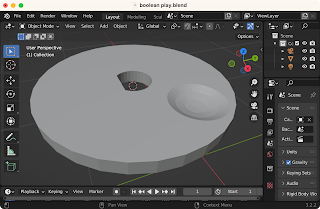 There are many videos on how to do things in Blender but I found the official tutorial from the BlenderFoundation YouTube channel was excellent.
The trick to making holes in objects is shown in this video on booleans.
Blender can export to STL or OBJ. I use the Creality slicer to produce gcode for the printer.
So far, my only failed print was a Millennium Falcon model that had a large overhang and ended up as a pile of hair. I have a great deal to learn but it is amazing technology.
Posted by Peter Marks at 4:24 PM

My impression is that while you can make Blender work, it's a bit of a round peg in a square hole. I've had a lot of success with Tinkercad which is web-based and good enough for pretty simple stuff.

For the more technically-minded, OpenSCAD is quite good. You define the shapes in a text-based programming language. Means you can actually perform maths operations on it. I've designed a couple of successful things in that.

And the gold standard is tools like Fusion360. There's a free license for hobbyists but a very steep learning curve. I'm at the bottom of that curve right now but it's clearly the exact right tool for the job.