Set up OpenWebRX at Drummond

My low noise reception seems worth sharing with a few friends so I set up OpenWebRX. I initially tried on an Ubuntu 21.10 laptop but for some reason couldn't get the AirSpy HF+ to work with it even though SoapySDR said all was well.

In the end I gave up and tried the easy option with was a pre-made image for Raspberry Pi. This worked well right out of the box. 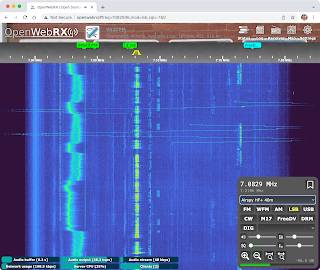 This is a very low noise location but do you see that big band of interference down the left side? It seems to be from the Raspberry Pi or it's USB power supply. Very distressing. The lowest noise USB power supply I have is a battery pack with USB output. I've ordered a metal case for the Pi and some clip on ferrite chokes for cables and will be interested to see if things can be improved.

Despite my reservations, the 31m shortwave broadcast band comes alive in the evening here: 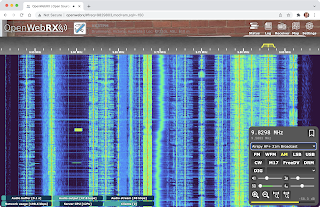 I first set this up on a Pi 3B which worked but struggled a bit. The Pi 4 is a very capable computer and handles the load with ease even with some background decoding of WSPR and FT8. 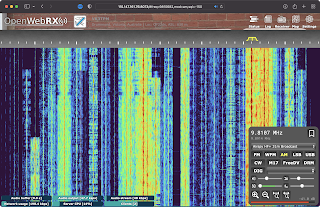 To answer Paul, and other's question - no it's not publicly listed as my IP isn't fixed and it will be frequently off line.

Great work by the OpenWebRX developers!

Nice web receiver, I looked for you in their ReceiverBook, not sure how to find you, or even if your URL is registered. Id like to listen to my 80m AM signals in Drummond! Paul VK3HN