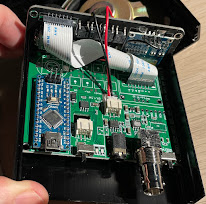 I recently purchased a nifty shortwave and FM receiver from AliExpress built around an Arduino Nano and Si4732.

I pulled mine apart to try to see if there was a label that would provide a clue about which version to write it it - there isn't. A tip: you can just undo the top screws front and back to get the lid off. Watch the speaker connected by short wires

I followed the instructions on swling.com but used Arduino 1.8.13 on macOS just fine.

Basically the steps are:

As well as plugging in to the Nano I had to power on the radio to program it.

The source code is available here. For my hardware, I found the version titled "SI473X_ALL_IN_ONE_OLED_RDS_CHINESE_V3" was the one that matched the buttons on my front panel.

In the source code of the sketch there are some settings to adjust if you like such as default volume.

Before upgrade here's the splash screen: 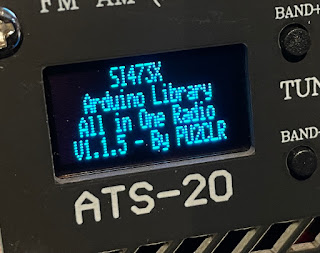 The display in operation is a bit different too. 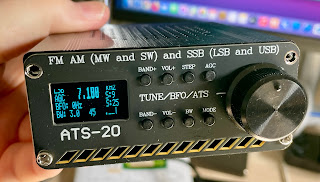 It's quite a sensitive receiver and sideband works pretty well. Here's an example.
There is no bandpass filtering on the input so it would probably be overloaded if connected to a broadband antenna. It's wonderful to have the source code to play with - all credit to PU2CLR.
Posted by Peter Marks at 12:47 PM

It's interesting how the received audio drops when you increment the VFO. Any ideas why this might be happening?

Question: Is there a short description of what the display is showing?
Example: Last or bottom line of the display shows:
BW:4KHz. 45. S:3 100%

I think the firmware is based on this repository: https://github.com/pu2clr/SI4735/tree/master/examples/SI47XX_03_OLED_I2C

BW is bandwidth.
S:3 is signal strength in a logarithmic scale.

Peter, when I try to verify/compile project I get an error with patch_ssb_compressed.

patch_ssb_compressed.h: No such file or directory

My receiver is an ATS20 PLUS.

Can you help me please?

I had this same problem, for myself I found two different solutions fairly useful....in the SI4735-master folder are the patch files...

1-you can cut and paste into the folder containing the arduino example file you want to run
2-you can open the files from arduino using library examples, in other words in arduino IDE go to file->examples->PU2CLR SI4735 -> choose an example, these examples in the actual library already have the approrpiate patch added.