Ham Radio on a Chromebook?

Chromebooks are generally low cost, low spec laptops that run a simpler operating system than Windows, Macs or Linux machines. As there’s less going on, the battery life can be excellent, sometimes ten hours or more. The Chrome browser runs really well and if you live in the cloud, and do everything through a web browser, a Chromebook is a great choice.

Chrome OS is very secure and updates itself regularly. The Google suite, which includes all of the office apps you might want, can be set to cache a copy of docs locally so you can work on them offline.

Under the hood, Chrome OS is a locked down version of Linux. There have been ways in the past to turn off this security so that other Linux apps could be installed but that was risky. In 2019, Google announced proper Linux support for Chrome OS.

What you get is a terminal and a pretty standard Debian 9 world with a few things installed such as git, vim and ssh. Using apt you can install many popular ham radio packages such as fldigi and wsjt-x. Here is fldigi running next to an Android app on Chrome OS: 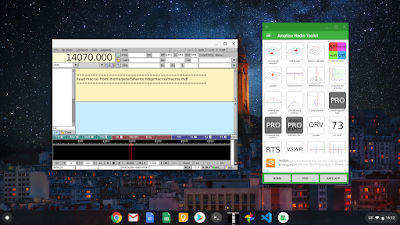 The virtual Linux environment has access to networking, USB ports and the ability to draw windows on screen and it seems to run quite well. The bad news, at the time of writing, is that sound doesn’t seem to work. I can see likely looking sound devices listed in the PortAudio device popups but no sound seems to come in or get out.

There’s a ticket open about audio capture, it appears to be an issue that the Linux VM needs a way to be given permission to access audio devices on Chrome OS. Work needs to be done both by Google on Chrome OS and by the Linux kernel maintainers on Linux.

Note that running the Linux virtual machine is said to cut battery life by about two hours.

Modern Chromebooks can also install and run many Android apps by simply using the Google Play store. Android apps seem to run in a phone sized window and work pretty well. The first ham radio app I went looking for was SDR Touch but unfortunately it’s not listed. My guess is that the special access it needs to talk to an RTL-SDR is not possible on the Chrome OS platform.


The micro SD card seems like a good way to expand the small built-in storage (64GB in my case). I inserted a card with music on it but when the Chromebook wakes from sleep it complained that I hadn’t unmounted the card before ejecting it. Battery power had drained much more than usual during this sleep as well, perhaps it was waking to check the card or something?

I find the icon for settings, a cog, is visually similar to the icon for screen brightness, a sun circle. Several times I’ve clicked the brightness hoping to get to settings.

The “shelf”, which is like the dock on macOS, can be used to launch applications including those in the Google suite. It took me a while to figure out how to put website launch buttons there. The trick is to go to the site, click the three vertical dot menu top right, open “more tools…”, choose “create shortcut…” and then make a shortcut to the site. These shortcuts appear on the “desktop” which can be accessed from the search key. Show the desktop and drag the icon to the shelf. This should be easier.

I purchased this 14 inch Chromebook for $397. The main reason, apart from learning about Chrome OS, is to use it for reading mail and news in the morning while having breakfast. The morning routine is exclusively looking at web sites in a web browser so a web only machine is a perfect choice.

This Chromebook has a high resolution screen for the money. 1920x1080 with a matt surface. It’s said to be 220 nits in brightness but I find the contrast quite low. Many Chromebooks, and in fact surprisingly many low cost Windows laptops have screens that are just 768 lines high and this is not enough for viewing web sites that increasingly overlay the page with annoying requests to agree to cookies, sign up for newsletters, or have you watch floating videos.

The chiclet keyboard is good and the trackpad works very well - not to Apple standard - but responsive.

This laptop has USB-C ports on both sides, something I wish Apple would do on all laptops, so you can charge from either side with minimum cord crossing. It comes with a 45W USB-C charger but charges just fine from various USB-C chargers I have around the house. Other ports are two USB-A ports, headset, microSD slot.

Running Chrome OS means that the laptop boots quickly, wakes instantly, and runs the Chrome browser better, I think, than any other platform.

Battery life is good. In my use as a breakfast news consumer, I charge it every few days (perhaps 4) and don’t feel panic as the battery level drops. It does seem to run down rapidly towards the end though.

I'm a big fan of USB-C, I know it's not cool to say so. Plugging a 4k monitor in via a USB-C cable worked perfectly and a second desktop appeared with plenty of space. It defaulted to tiny text but that's easily changed in device settings. 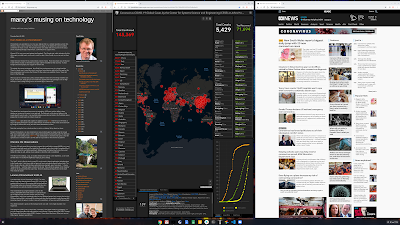 As expected, this single cable not only passes video and audio but also charges the laptop.


If you’re looking for a low cost laptop for browsing the web, particularly if you use Google’s mail and other cloud tools, a Chromebook is a great choice. I would recommend one to a non tech savvy user just as I would suggest an iPad.

The recent feature of being able to run Linux apps is interesting and means that as a unix user I can install power tools like Visual Studio Code, python, even graphical Linux apps.

Ham Radio on a Chromebook?


At the time of writing, the main missing piece for Ham Radio applications is access to sound. Devices are listed and I’m sure one day soon this will be solved. So, ham radio on a Chromebook? No. Not quite yet.


This conclusion is in line with Betteridge's Law.
Posted by Peter Marks at 3:24 PM