A visit to the home of FreeDV and codec2

Arriving in Adelaide after the spectacular Great Ocean Road, David, VK5DGR, was kind enough to invite me to stay with him. I knew I was in the right place when the squid pole supporting a corner dipole came in to view. 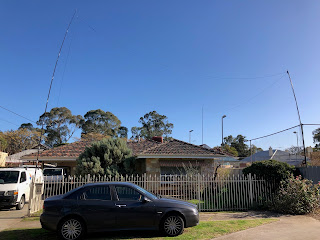 I was very keen to see where the "magic" happens concerning the development of the world class low bit rate voice codec2 and FreeDV. While David insists that much of it is done on a couch with an old ThinkPad he does have a nice bedroom setup with some test gear. 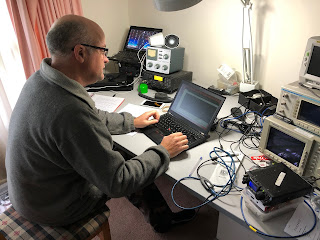 Two members of the influential Amateur Radio Experimenters group, Mark, VK5QI and Matt, VK5ZM came for dinner and we had an entertaining chat about balloon telemetry and tracking. Mark brought along one of the radio transmitters harvested from those launched by the BOM. 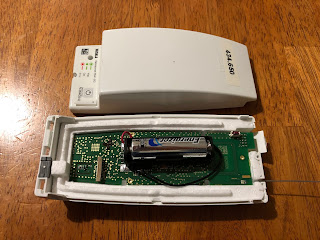 These folks are known internationally for their work launching balloons and tracking them. It was great to meet. David, has contributed an improvement to the radio modem software that is used to transmit telemetry.

At the moment, David is working on a new mode called 2200 for FreeDV with better quality (and a higher bit rate than 700D) and I was pressed into service doing a field test where we left a test transmission running and drove several kilometres away to receive off air and measure real world errors. We met up with Peter, VK5APR at the park. I haven't seen an Alexloop up close before and was impressed with how well it worked. 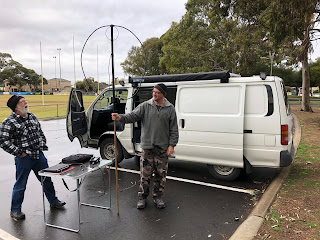 The tests went well and it was interesting to see how the spectrum looked flatter on my KX3 than it did on an FT817 (where is slopes down to the right). 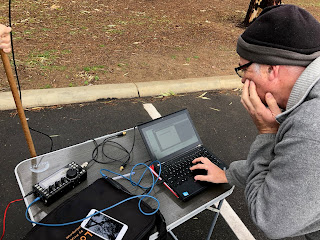 David has a much better and more technical blog post on the development and field testing.
Posted by Peter Marks at 1:59 PM