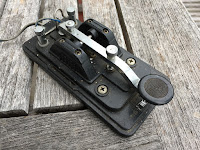 I've had several shots at learning morse code. In episode 108 of the excellent QSO Today podcast, there was a great suggestion that the guest learned morse code by listening over and over to a recording of morse code characters followed by the spoken letter.

Despite hunting the internet I could only find other people looking for similar drill tapes but no actual audio files.

macOS has an excellent text to speech synthesiser so I found some software to convert text to morse in a wav file and combined it with the macOS "say" command and now have a system that can generate random sequences.

You can hear a short sample here.

I've forked the original repo and put my version here. The bulk of the work is by Thomas Horsten but hasn't been touched for years.

I've put a full length drill recording up here. This one repeats each letter three times.
Posted by Peter Marks at 2:36 PM

More than cool... It may be a very good tool to learn morse for many aspirants.

Thanks for sharing this - although programming random Letter/Morse sequences may elude me for a while (i have had no programming experience), the recording you offer will be most helpful. I also use this song and similar songs on YouTube but they can be a bit irritating after a while!