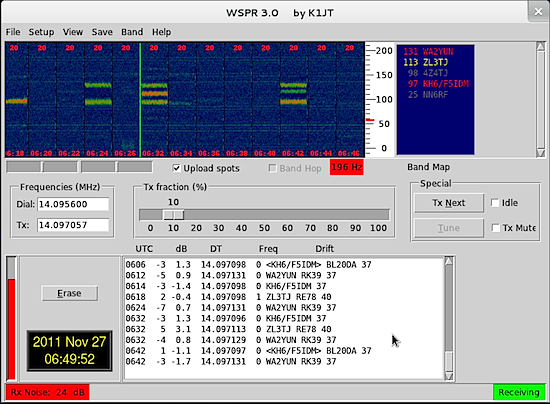 Can't explain why I get no decodes on Windows. Perhaps the sound card is not right?
Posted by Peter Marks at 4:53 PM

Hello Peter, never heard of Fedora. But do now,have to test it. Trying Ubuntu and Linux Mint now. Do I understand you made a WSPR application for Fedora? It looks like the one in Win. Does it also work in Ubuntu, since I understand Fedora is also Linux based. 73, Bas

Fedora is a version of Red Hat linux. You can get it here.

I think there is a binary version of WSPR for Debian based distributions, including Ubuntu, from this page.

To install on Fedora I basically followed the instructions on the development page. Now, the trick is that the pre-requisite package names are a little different so you need to do a 'yum search' to find out what each one is called.

I'm sorry it's not trivial to make a binary distribution due to the required libraries.

You'll need to be at least a little familiar with building programs on linux using configure and make to go down this path, but let me know if I can help.