For our Tibetan readers... 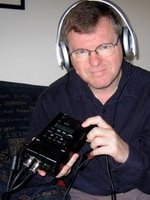 We do a little podcasting around here. Just launched is a series designed to help Tibetans moving to Australia to learn some English. It's called Tibetans Talk English.

This new site is the companion to the previous series which helps English speakers learn a bit of Tibetan, called Talk Tibetan.

It was a surprise to me that there are hundreds of Tibetans living around Dee Why at Sydney's Northern Beaches.

The podcasts are constructed in GarageBand with fine audio editing in Sound Studio.

The ABC's 360 documentary series had a wonderful show on Tibetans in Dee Why including co-presenter Dorgee.
Posted by Peter Marks at 3:03 AM