Spurred on by the success and what I've learned from my battle with the Bitx20 I sat down and constructed a transmitter from scratch.

It's the "simplex sidebander" from Drew Diamond's "Radio projects for the amateur" first book. Dave, VK3ASE kindly gave me a couple of crystals for 3.670MHz when I visited recently. As you can guess I skipped the crystal filter and made it a double sideband exciter. 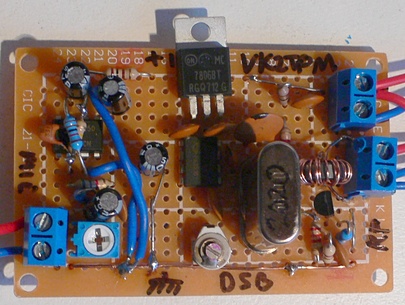 The circuit has a 741 Op amp as a mic pre-amp, an NE612 as both the oscillator and mixer, followed by a 2N2222 buffer. That big three terminal thing is a vastly overrated 7806 voltage regulator.

Two more RF stages, comprising a 2N3053 and an IRF510 are on the second board. Finally there's the output low pass filter. I'm waiting for some more Amidon T50-2s to arrive so I can add the other filter stages.

It looks ok on the CRO (me saying "haaalow") and sounds reasonable on the local radio. 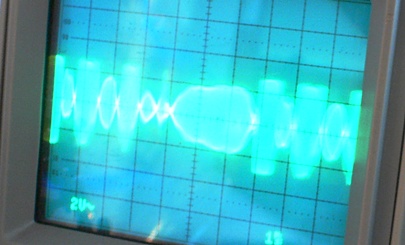 When there's no audio, carrier is well supressed. When speaking, I get a nice 6W out by the looks.

My construction is pretty sloppy, leads too long etc, but hey - it's 80m so pretty forgiving thankfully.

I've learned an important lesson: when a toroid is required don't just grab a random loop from the junk box, try to get something of the same material! The Amidon toroid numbers, such as FT50-2, mean FT = Ferrite, 50 is the size, 2 is the material. So, substituting an FT43-2 worked fine.

Toroids.info is a good place for specifications and winding calculators.

With the help of Mike, VK2MJW, I've determined that my on-air audio is very distorted. I put this down to the RF power stages being unstable.

Interestingly the transmitter behaves quite well on a dummy load, but when connected to a real antenna tends to go into oscillation.

On it's own the exciter board sounds good. I've mounted the exciter in a nice shielded box and am currently re-building the driver and PA stages with more compact construction.
Posted by Peter Marks at 3:01 PM

Looks great there Peter. Did you resolve the birdies when you put it on an antenna? I'm particularly interested because there's a Simplex sidebander on eBay right now and I'm seriously thinking of putting in a bid. My eyesight - alas - has closed the kitmaking/small scale hb tho' I can still do big things like atu's. Are you using Drew's 80M DC receiver with the simplex?
Kind regards
Norm vk5gi

Yes, I rebuilt the buffer and final stages with better, more compact construction and was successful in having a lengthy contact between Sydney and Melbourne.

At this point I'm using a commercial receiver but yes a DC receiver is under construction at the moment..