Getting harder to talk to humans 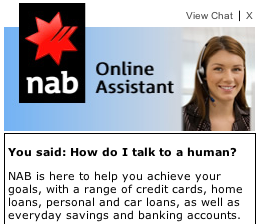 This morning I wanted to do something related to banking on the web site when a box popped up offering to connect me to someone who could help, keyboard to keyboard.

I explained what I wanted and it was no help at all, pretty soon I realised it was just an expert system - it was clever enough to realise that it hadn't helped me and apologise.

A couple of weeks a go our BigPond cable modem connection went down, the light on the box was flashing meaning there's no carrier.

I did the usual, power cycled the modem, checked the cables etc but clearly there was no signal from the street. So I rang them...

An extremely tedious interactive voice response system led me step by tedious step through silly things like re-booting my computer (which is pretty irrelevant given that the modem is plugged in to a router). At each stage I had to tell it when I'd done that.

In the end it said to power cycle the modem and say "continue" when the light was on solidly again, which of course never happened. There was no way out of this loop!

I hung up and rang back. Right away the system said "we notice you've just rung back" and offered to put me through to a human!

The human told me I could have got out by saying "Operator" at any point, but you can't tell that by calling. The human also said that yes, there's an outage in your area.

Surely if they're smart enough to know that I just rang back, they could also figure out that there's a known problem in my area rather than torturing me for 15 minutes luring me into a trap?
Posted by Peter Marks at 12:52 PM

I Got sick of going through all that crap with telstra as well. Especially since after you have done that and get to speak to someone they still ask for your phone number details and try to make you do that diagnostic stuff again.
I don't like those voice ones so I usually just blow into the receiver until the computer gives up, usualy 2 or 3 goes, and put me through to an operator. (Also that is how I found telstra's operator command)

Brings back such sweet memories. Have a look at Break out of "phone jail". The "0 mashing" has worked for me in the past and also provides some satisfaction of "beating the system".