My internet here at Drummond isn't great. It's NBN Fixed wireless. While the download speed is OK I experience packet loss and have trouble with video calls some times.

Recently I've noticed that the Apple TV would sometimes have very low download speed such that streaming video dropped back to a very low bitrate version. I have been using Google Wifi mesh devices but was frustrated by the very limited control available through the Google Home app.

I decided to buy some Wifi routers that run OpenWrt, I chose the GL•iNet AX1800s. AKA Flint. 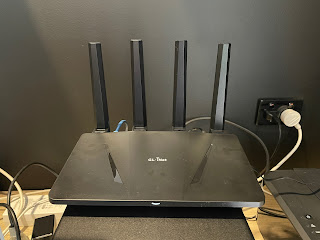 If the client is capable, these routers can provide gigabit speed over wifi. Of course, my internet connection is way below this. Having replaced the Telstra Wifi router with one of these I find that the broadband speed, as measured with the Ookla app is about 10Mbps faster than previously. 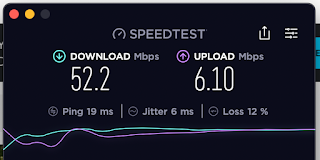 Note the terrible 12% loss though (not in my network). Interestingly ping loss is zero but I see loss during speed tests so I guess it's larger packets that are dropped.

Here we have two buildings and they are linked with ethernet so a second router is used in the shed to extend the network by setting it to "Access Point" mode. 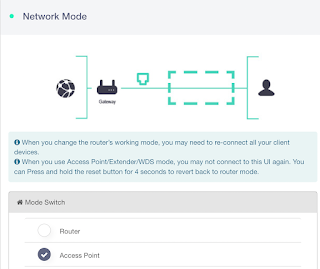 The meaning of this setting was not obvious to me and googling how to do this on OpenWRT led me down a complex and incorrect path before I reset the router and looked more deeply.

Access Point mode means that the router shares the network available on its WAN port via ethernet and Wifi without doing its own DHCP or NAT.

I just purchased a GL-AR750s (same manufacturer) as a mobile router and found it's perfect for what I need. It accepts multiple inputs either cable, tethered, 4G dongle or AP and can auto connect to my VPN which connects to my remote receiver site. You can switch the VPN on or off with a switch on the side. I've found it to be an excellent product at a great price. I'll be interested to how you find the performance of yours long term - Grant VK3MSG