Raising an antenna support with a drone

This week I had visits from several hams including Dave, VK3ASE, who brought a long squid pole and an offer to help with antenna raising. Dallas, VK3EB, helped with the off centre fed dipole.

I decided to try raising a line over a nice clear tree branch with a drone rather than the squid pole. The drone could lift the line without problem, the issue (which I anticipated), was landing again on the other side with the line now trailing above the drone.

Despite my best efforts to keep the line between the rotors eventually it tangled and the drone struggled for a while before I shut it off. This left the drone hanging from the line but undamaged. Dave recorded some video of the enterprise:

The supports for the ends of the dipole were in trees with substantial leaf cover so we used the squid pole for those.

My antenna tree supports an Off Centre Fed Dipole cut for 80m that does very well on 40 and 20m. Now it has a second support that currently has a dipole cut for 30m. The branch is nice and clear so the drone was easy to fly over it. 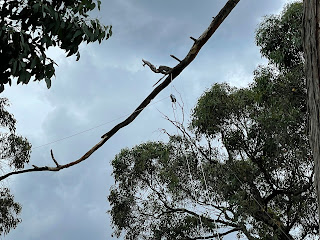 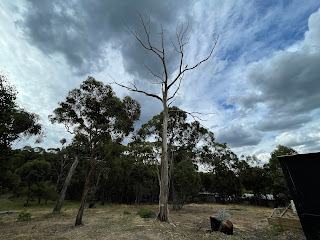