My first SOTA - cold and wet but not disappointing 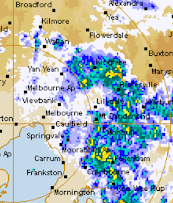 Paul, VK3HN, kindly invited me along to a Summits On The Air (SOTA) activation today at Mount Disappointment close to Melbourne.
The weather did not look promising but we decided to risk it and while it was rather damp and cool, it could have been worse.
David, VK3KR, generously drove and Owen, VK3EAR cleverly opted not to come and stayed at home to monitor.
I took a loop antenna and an IC-705 with external battery. Paul had two home brew rigs and used an end fed antenna. David was on 2m with a home built beam.
Paul has created a video that captures the day very well:
Here is Paul's latest home brew rig. It is a crystal locked CW transceiver. I really admire his construction and recommend his video about how he hand makes printed circuit boards. 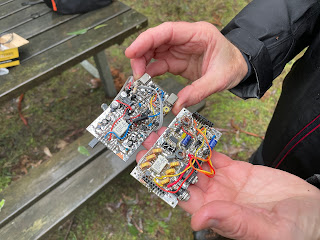 The mountain was beautiful but there was intermittent rain and the temperature fell to about 7C. We were all soaked through by the end of the outing. 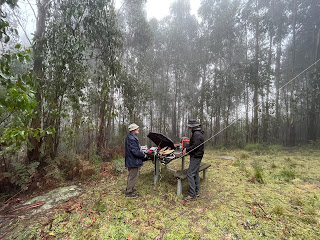 SOTA is a great idea in that it encourages bush walks to mountain peaks with a bit of ham radio activity. David was the most successful and even had a contact with Peter, VK3YE on 2m.
Things I learned:
I'm looking forward to trying this again in better conditions.
Posted by Peter Marks at 4:31 PM

Thanks for your wrap-up Peter, we will do it again soon in better weather for sure. In fact I cannot remember activating in worse weather! Oh well, that was the only day I had, but we look forward to Spring and Summer in the mountains.

I agree on your insights re weight and minimisation, although each SOTA summit is different. Some allow you to drive right up and you can take whatever you like. Others require a hike of many hours so weight is everything. There are some clever minimal, tiny, flea-weight SOTA stations to be seen on YouTube and the SOTA Reflector.

See you next time, Paul VK3HN.