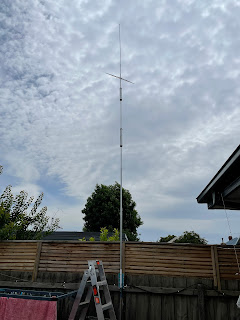 With little space in the back yard here I decided to try a cheap vertical I saw on AliExpress. The name GP4 presumably refers to the claimed four bands as a ground plane.
The claimed bands are 40m, 20m, 15m and 10m.

The antenna cost me AU$120 plus $128 shipping. It arrived in ten days via FedEx but it's sometimes painful to pay more in shipping that the price of the item.

Boxed nicely in cardboard completely covered in tape. The tubes were protected with plastic and foam so it arrived in excellent shape and does look to be pretty good quality.

There are no instructions in the box but on the ad there are pictures and a machine translated note mostly about the counterpoises.

It goes together pretty well and the size of the aluminium tubes forces you to put it together the right way. The matching stubs are clearly labelled so I don't think you can go wrong. 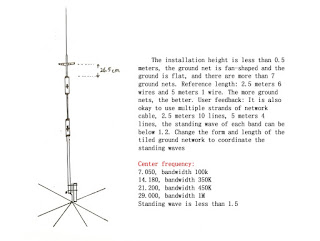 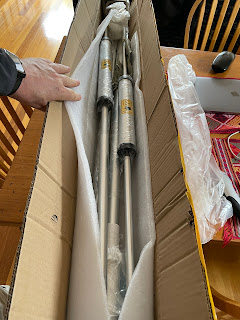 Some of the holes didn't quite match up for me and I had to drill them slightly with a 4mm bit: 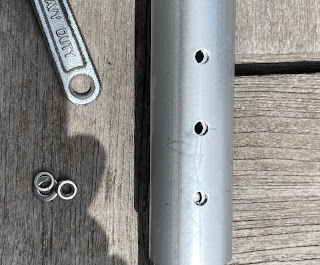 The kit comes with one M4 bolt and nut for each join and then pop-rivets for the other holes. I guess the aluminium pop-rivets might be a good idea from the perspective of metal corrosion but I chose to use marine grade nuts and bolts for all joins.
The mount spacing seems rather short for an antenna of this height (5.65m) that does catch the breeze. 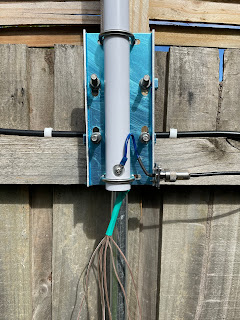 The nuts on the back of the U-bolts are hard to tighten as they are close to the U section of the aluminium plate.
I've run out 6 x 2.5m and 2 x 5m counterpoise wires (which is what I think they're asking in the instructions above). They provide a copper lug and you supply the wires. I've covered it in heat shrink tubing (which makes everything look professional). I will cover the PL-259 connection in self-annealing tape soon.
The antenna works well on 40m but 20m is a bit off. 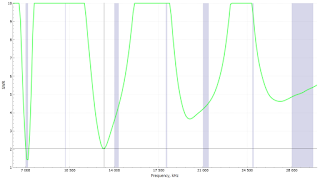 I have slightly shortened the low span which moved the resonance near 20m slightly closer but also moved the nice 40m resonance higher too.
Initial tests using WSPR show that transmissions are getting out very well but my reception seems rather noisy. Noise here varies quite a bit and I'm seeing S7 noise which is better than the end fed which is currently over S9. 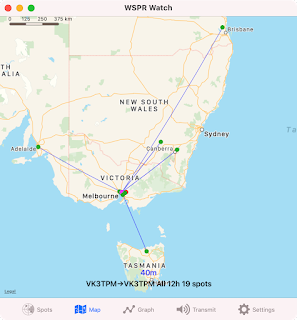 I would recommend trying this antenna, it's much cheaper than alternatives promising similar features. My concerns are the torque on the closely spaced U bolt mount in high winds and whether the matching coils will survive in the Australian sun.
Perhaps the higher bands aren't working well because I need to "Change the form and length of the tiled ground network to coordinate the standing waves".
Working well on 40m: 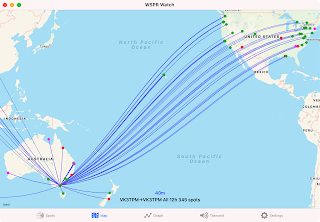 Can you comment on what grounding / earth system you used.

I'm using 6 x 2.5m wires and 2 5m wires roughly spread along the fence so not great. I guess it makes it a bit directional but tunes up well on 40 and 20.

Hi Peter, the 750V Shortwave antenna was delivered 2 days ago. I also purchased on Aliexpress. Apparently its like two GP4 antennas, At the moment I'm finding it difficult to mount it at 6 meters height, I only have a small garden! So what I am going to do is use one half as a vertical. Could you please confirm what traps are used on the GP4 as there seems to be no instruction manual for any of these antennas!

Yes it looks like the antenna you have is two of the verticals I have. It's a few years since I installed it and there was enough documentation for it to go together without too much head scratching. I suggest you write to the seller and they should send you something.

Hi Peter, I have mounted the GP4 antenna close to the ground, about a 100mm and run 6 radials.
I find the noise level at about 9 on 20 meters, don't know its the antenna or just the conditions at the moment.
I was actually hoping to use it on 20 meters for DXing, but no luck so far.