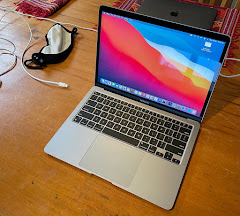 I can't wait to see what they do with the higher end machines.
Posted by Peter Marks at 10:00 AM